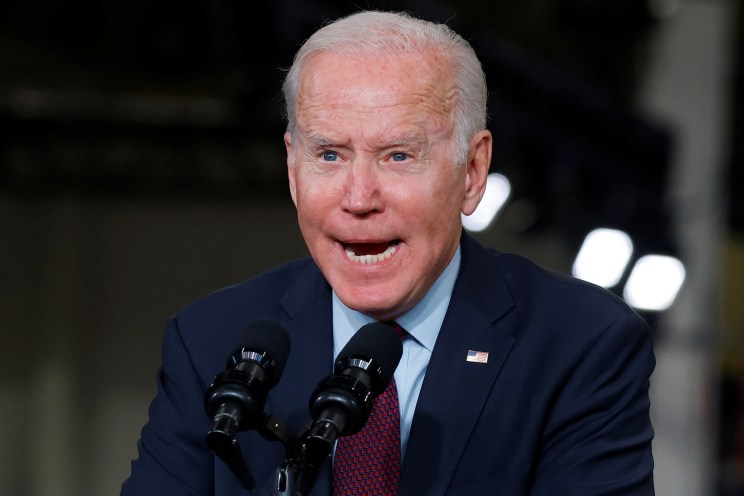 President Joe Biden keeps telling lies. He just told a New Hampshire crowd of “having had a house burn down with my wife in it — she got out safely, God willing.” In fact, the Associated Press reports, it was a minor kitchen fire, with no damage visible from outside.

He’s overblown the incident in the past, albeit not as much. Nor can he stop talking about a chat with an Amtrak conductor in his seventh year as vice president, when the guy retired 15 years before Biden became veep and had died by the year of the tale.

Biden claims he was offered a job by an Idaho lumber company; they have no record. He claims he “used to drive” an 18-wheeler — it didn’t happen. He’s said he visited Pittsburgh’s Tree of Life synagogue after the 2018 massacre, speaking to the rabbi, when the synagogue says he’s never even been there.

It’s a schtick and a disturbing one: He invents stuff in order to make a seemingly personal connection with his audience, but it’s a phony connection. Biden has been in Washington almost his entire adult life, he’s not a blue-collar worker struggling to get by.

Even when there’s some truth, he exaggerates — as when he chats with Gold Star families about his late son Beau as if he’d died in action, rather than of brain cancer.

Look: You can show empathy without an actual shared experience. Insisting on making one up isn’t truly relating, it’s a calculated con job.

It would be bad enough if Biden only told personal tall tales. But his reality distortion field now extends to national policy. He routinely insists “all the economists” back his plans, writes off inflation as a temporary spike, insists the border surge is just “seasonal,” even calls his disastrous Afghan bugout a “success” (while falsely claiming his generals didn’t object).

Truth just doesn’t matter: He’ll say whatever he likes to get past the moment. He got away with it for most of his life because nobody bothers to fact-check a Delaware senator.

Now he’s president, and his lies are going to hurt us all.

Joe Biden continued with his story about Corn Pop: "After I took down Corn Pop and his fellow bad boys, Honeycomb, Apple Jack, and that dimwit, Special K, Corn Pop and I developed a mutual respect for each other and we became good friends. In fact, I briefly dated his sister, Sugar Smack, but that was before she began writing bad Chex and turning Trix.
So, late one night Corn Pop and I walked downtown to grab sandwiches at Subway. It was about 2 a.m. and along the way we ran into Jussie Smollet, who smelled of bleach and had a rope around his neck, but we didn't think anything of it. Then, out of nowhere, Cesar Sayoc's white van covered in Trump stickers, which strangely didn't have a scratch on it, pulled up and Nick Sandmann and his Covington Catholic crew, all wearing red MAGA caps, jumped out, and they began staring us down.
I tell you, I was never so scared in my Life. It was scarier than finding yourself in a dark alley with Count Chocula and Franken Berry. Corn Pop was so scared that he dropped a load of Cocoa Puffs in his pants. I was about to whip out my cell phone and call for military backup since I had Captain Crunch and General Mills on speed-dial, but at that moment I said to myself, 'I'm a Biden, man, and I'm not going to be intimidated and bullied.' So I grabbed a drum from Nathan Phillips and walked over and beat it in Nick's face while chanting the war cry of Elizabeth Warren's tribe.
Man, that was something! I look back on that night and thank my Lucky Charms that I'm alive today to tell you about it. No joke! Cerealously, that's the truth, on my name as a Biden."