Everybody associated with keeping Joe Biden in office should be charged with elder abuse. And, where the heck has Jillybean Biden been? Covid maybe? She is usually there leading Joe around by the hand. What the heck is going on?? 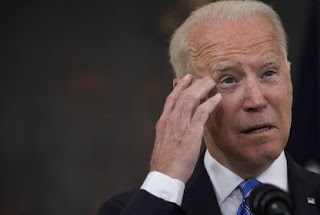 Joe Biden was let out of the basement yesterday and things did not go well as he meandered off-script. That’s certainly not surprising, yet it continues to be newsworthy when the President of the United States shows an inability to function at a basic level. We should never get comfortable with scenes of mental decline from the man who is supposed to be leading the most powerful nation on earth.

To kick things off, Sen. Chuck Schumer brought the fire with this introduction.

That’s when Biden decided to try launch into a promotion of his ridiculous “build back better” agenda. What transpired was both insulting and largely uninterpretable.

Props to Biden for realizing and correcting himself that no amount of government spending is going to stop hurricanes from destroying property or all floods from happening, yet is this setting really the place to make such a political statement? What part of his “build back better” agenda is going to make homes and businesses more resilient against mega-storms? How is it going to stop water from flowing into places that reside below sea level? Last I checked, gravity is an immutable characteristic of the environment we live in. That’s the insulting part.

Rather, I think the biggest thing revealed here is just how empty Biden’s presidency is. It’s built on faux claims of moderation mixed with woke-ism and mindless sloganeering that spans the gambit from absurd to cringe. We don’t need to “build back better.” We need to build back what we had, including the economy that Biden has thoroughly knee-capped.

Various crises should not serve as an excuse to remake society when the society we had was one with record low unemployment, a booming economy, and a relatively secure border. Spending the nation into oblivion won’t make things better. Instead, it’ll just accelerate our decline. All the “build back better” programs in the world can’t fix that.

Biden’s presidency is a hollow shell of nothingness. He’s seeking to be transformational when the country doesn’t need transformation. COVID has offered him that excuse to some extent, but his massive failures on that front have undercut his case. To even make that speech today, promoting his domestic political agenda, while Americans continue to be held hostage in Afghanistan is tone-deaf. And if his recent numbers are any indication, the majority of the public are not buying anything he’s selling these days.

The Emperor has no clothes, and that’s a scary mental image. 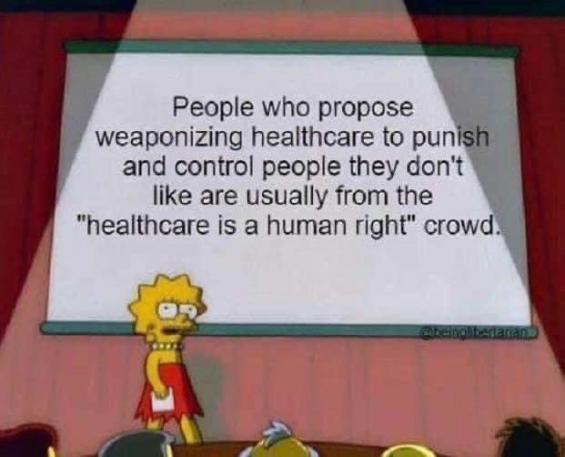 And Politicizing a virus/vaccine falls squarely on the GOP. 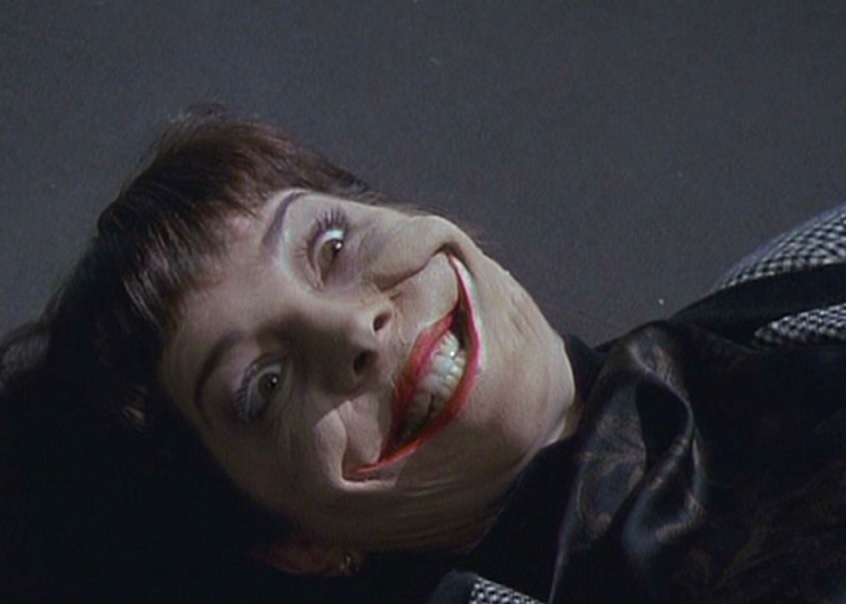 Unicorn you say GOP politicizing. however both Biden and Harris when asked prior to taking office would they take the vax said they didn't trust Trump.  Both sides politicize,, Maybe we all need to realize powers to be are for themselves and want to keep us divided.

Unicorn you say GOP politicizing. however both Biden and Harris when asked prior to taking office would they take the vax said they didn't trust Trump.  Both sides politicize,, Maybe we all need to realize powers to be are for themselves and want to keep us divided.

Who do they want you to unite? Dems idea of uniting is Republicans giving in to every thing they want us to do, with absolutely NO questions asked. Unite? Funny, since Obama came on the scene the left has done nothing but work to divide the country, and work to see that we have no say in anything that goes on here.

No one hated Obama as much as I did but I never went online and posted about him day and night, hoping for his death or even his wife Sasquatch's death like the lefties did for Trump, his family, and his supporters. If I had ranted about him like the lefties rant about every Republican and their supporters, and wishing death on them and their supporters, my family would have stepped in and gotten me mental help. Dems are the most despicable, violent, oppressive pieces ** **** on this planet. Now they have saddled us with China Joe Biden and Heels Up Harris. A demented old man that has been in politics for 50 years and has nothing to show for it, except making himself and his family rich through corruption and quid pro quo, and a woman that got where she is by sleeping around. It is time for everyone to speak up in opposition to the dems at EVERY opportunity before they destroy this country.

Unite with this? Below is just a quick list. There are thousands of other examples of the dems using threats, violence, destruction, intimidation, terrorist attacks on people, and lies to get their way, and now all of a sudden they want to hug it out and sing Kumbaya??

One month after President Trump’s inauguration, a group of young children in Chicago were filmed beating and tearing apart a President Trump pinata, while union members and leftist bullies cheered them on. Many of the kids appear to be uncomfortable with the adults cheering them on to behave violently, but reluctantly go along to please the cheering mob of leftists.

A letter addressed to Donald Trump Jr. was sent to his home. When Trump’s former wife Vanessa opened the letter, she found a suspicious white powder inside. Vanessa Trump was taken to the hospital after Vanessa reported feeling dizzy.

On June 15, 2018, Trump-hating, Bernie Sanders supporter and domestic terrorist James T. Hodgkinson, 66, from Belleville, Illinois, was killed by Capitol Police after firing up to 100 rounds from an assault rifle at a baseball park in Alexandria, Virginia, leaving five injured including House Majority Whip Steve Scalise at 7am on Wednesday.

The next day, Laura Loomer of Rebel Media rushed the stage at the controversial NYC Shakespeare in a performance of Julius Caesar that played out an assassination of a President Trump look-alike in front of cheering crowds in Central Park. Loomer yelled “stop leftist violence” before she was escorted off stage.

On June 19, 2018, B-actor Tom Arnold took to Twitter to call on fellow Democrats to threaten Barron Trump when Melania takes him to school. The disgusting actor took it even further and called on the Left to go to the Kushner’s kids school.

One day later, First lady Melania Trump was forced to call the Secret Service after another B-actor, Peter Fonda targeted her 11-year-old son, Barron Trump, saying “We should rip Barron Trump from his mother’s arms and put him in a cage with pedophiles and see if mother will stand up against the giant a**hole she is married to…” 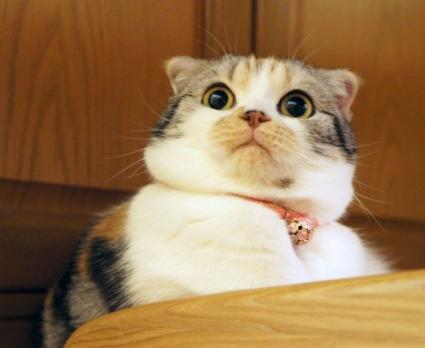 (A cage with pedophiles? Joe and Hunter Biden)?

A Nebraska Democratic Party official found himself in hot water only days after Republican Congressman Steve Scalise was shot. An audio recording was posted on YouTube Thursday with Phil Montag, a technology chairman, voicing how glad he was that House Majority Whip Steve Scalise, R-La., got shot last week at a GOP baseball practice. Nebraska Democratic Party Chairwoman Jane Kleeb confirmed to FOX 42 News Thursday it was really his voice:

Four days later, Democrat Congresswoman Maxine Waters (CA) called on her supporters to go after anyone in Trump’s cabinet or inner circle:

“History will record while he tried to step on all of us, we kicked him in his rear and step on him.”

“And so, let’s stay the course…Let’s make sure we show up wherever we have to show up and if you see anybody from that Cabinet in a restaurant, in a department store, at a gasoline station, you get out and you create a crowd and you push back on them, and you tell them they’re not welcome anymore, anywhere,”

“Mr. President, we will see you every day, every hour of the day, everywhere that we are to let you know you cannot get away with this!”

Barack Obama’s former Secretary of State and Attorney General both called for violence against Republicans.

Less than one month ago, failed presidential candidate Hillary Clinton told CNN’s Cristiane Amanpour that you can’t be civil with a party who doesn’t agree with you. America’s sorest loser told Amanpour, “That’s why I believe if we are fortunate enough to win back the House and/or the Senate, that’s when civility can start again. But until then, the only thing that the Republicans seem to recognize and respect is strength.”

Two days later, Barack Obama’s crooked Attorney General, who was arrested in college for participating in an armed takeover of the former Columbia ROTC office, told a crowd at a rally for Black gubernatorial candidate Stacy Abrams, “Michelle [Obama] always says ‘When they go low, we go high,'” Holder told the crowd. “No. No. When they go low, we kick them…”

1130... i answered your post.... one of your fellow republicans didn't like it, evidently.... good luck on the ultra conservative forums. No need in trying to have a discussion with people who aren't willing to do anything but rail about the horrors caused by the other half of Americans.

If any of you are fragile and so hopeless in America... feel free to leave. That was the Republican solution for Trump's Admin.
IF you don't like it in America, get on out.