Joe Biden has had a rough few months. Polling has his approval falling below 40 percent and Friday's jobs report won't do anything to prop it up. The Afghanistan catastrophe, COVID-19 deaths surpassing those during Donald Trump's tenure, and the increasing crisis at the southern border all will be secondary compared to the coming recession. Unlike many other economic events, this one will be the direct cause of policies promulgated by the White House. Three main issues likely will plunge the country into economic backsliding and spark stagflation by the end of 2022: inflation, supply chain issues, and an unraveling labor market.Americans have noticed increasing prices everywhere from the gas pump to grocery store aisles. Inflation has hit a 30-year high. Economists and political pundits are shifting their tone, away from denying its existence (recall the White House's "save 16 cents on your July 4th BBQ" approach) to preparing the public for the current and coming pain. Media narratives now reflect that price hikes aren't "going away very soon" to full risk of "runaway" inflation. Inflated prices already have hit double digits overseas and cost the average household more than $2,000 annually.

Reckless federal spending and money printing are only accelerating inflation. The last year and a half's policies are effectively "baked in" to what is coming next. However, passing Biden's $3.5 trillion infrastructure package would have a sapping effect on the economy. The massive spending binge will face a reckoning in December's fight over raising the debt limit. Senate Minority Leader Mitch McConnell (R-Ky.) already has signaled that he won't pull the Democrats' chestnuts out of the fire in two months. The fear of a default or unconventional workarounds, such as a trillion-dollar coin, will stifle investment and lead to increasing bank interest rates to mitigate risk. Politicians could plunge the country into a deep recession wholly of their own making - and the consequences will be felt primarily by American families and small businesses.Store shelves in many cities are partially bare, bringing up the bad memories of March and April of 2020. Manufactured goods and raw materials of all types are becoming increasingly rare. This time it's not driven by demand issues, such as panic buying (yet), but instead by those of supply. In short, the economy is rapidly running out of goods. The disruptions in our workforce is limiting the number of dockworkers, truck drivers, and more essential jobs necessary to keep goods flowing at a rapid rate and reasonable price. The average family can expect to pay much higher prices for everyday essentials, have significantly less inventory selection at grocery and big box stores, and face months-long shipping delays when ordering online.

Perhaps the largest factor sparking economic atrophy is the misguided employment policies of the Biden administration. Heavy-handed COVID-19 vaccine mandates don't help, but the far more likely cause of sclerotic market conditions is the unemployment "bonus" of 2020-2021. While the additional federal unemployment funding ended in September, many employees have chosen not to go back to traditional work. Some cannot return to their jobs because of child care concerns. Others have lost their skills or job type since the start of the pandemic. These factors already showed in last week's data. Economists projected September's job growth at a half-million jobs. It turned out to be less than 40 percent of that. Of course, the unemployment rate fell, but only because individuals left the labor market. The labor force participation rate remains stubbornly stuck at around 61 percent. There are plenty of jobs available - in July it was nearly 11 million - even though there are just 2.7 million long-term unemployed.

At the same time, the "Build Back Better" agenda includes a raft of welfare provisions that will either make more Americans more dependent on the government or drive up prices (or likely both). Its "equity" provisions include an expansion of the child tax credit and housing subsidies that will rebuild the subprime mortgage crisis of the mid- to late-2000s. Expanding housing subsidies, Medicaid funding, and higher education grants will drive up the price of all of these commodities, adding inflationary pressure that will harm not only the intended beneficiaries but the public at large. The proposed Biden tax hikes intend to target the wealthy, but the average family will foot the true cost of the bill through higher rent and mortgage prices, higher health insurance premiums, and higher college tuition. How much more is your family able to spare for D.C.'s recklessness?

As the new recession dawns, many Americans are not prepared to weather bad economic stagnation. As of late last year, nearly two-thirds of families lived paycheck to paycheck, and more than half have less than three months' worth of savings. A quarter have effectively none at all. The impulse to start saving often hamstrings Americans - low bank interest rates discourage savings and inflation wipes out accounts' value.

Even worse, the next crisis will be a veneer of excuses for more broad government intervention that has failed so often, and so spectacularly, in the past. Swamp creatures in D.C. (and not only Democrats) believe that each crisis caused by a growing government is "solved" by growing it further. Eventually, the house of cards built through sweeping tax hikes, paying people not to work, rampant money printing, and borrowing will lead the nation to a 1789 moment - not the start of our republic, but the debt and economic crisis that led to the French Revolution.

Kristin Tate is a libertarian writer whose latest book is "How Do I Tax Thee? A Field Guide to the Great American Rip-Off." Follow her on Twitter @KristinBTate.

Biden... who Republicans say is riddled with dementia ... is such a mastermind.. he single handed started a recession just mere months into his Presidency.
or
Republican policy has once again put the economy in danger and Congressional Republicans refuse to do anything about it, because Joe Biden.

Every single time Republicans control the US government , the US has a recession... Look it up. Facts don't lie. 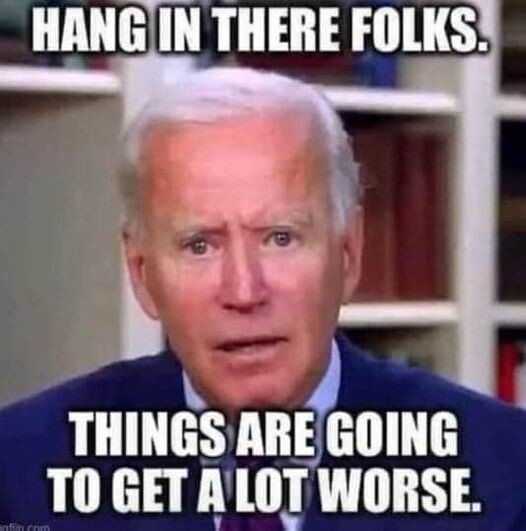 jutu is out here arguing with her alias again.

Ever notice, there are two, sometimes three, liberal IDs that magically appear together here after being gone a long while, post a little and then disappear for a long period of time? And, every once and a while a real liberal 'blast from the past' shows up, to post snarky remarks along with those IDs and run? Most likely because they are blocked so they bring in other IDs to 'take a shot' and run before that ID is blocked too. Pitiful.

Ever notice, there are two, sometimes three, liberal IDs that magically appear together here after being gone a long while, post a little and then disappear for a long period of time? And, every once and a while a real liberal 'blast from the past' shows up, to post snarky remarks along with those IDs and run? Most likely because they are blocked so they bring in other IDs to 'take a shot' and run before that ID is blocked too. Pitiful.

Ever noticed that about 75% of the topics, in these forms, are just you talking to yourself? hahahahaha Biden... who Republicans say is riddled with dementia ... is such a mastermind.. he single handed started a recession just mere months into his Presidency.
or
Republican policy has once again put the economy in danger and Congressional Republicans refuse to do anything about it, because Joe Biden.

Every single time Republicans control the US government , the US has a recession... Look it up. Facts don't lie.

hmmm but democrats are in control, Trump left them with a good economy, a vax, closed border, several corporations moving back to USA, country not dependent on others for fuel. retirement funds growing.  Got us out of some programs (not enough) where we were sending taxpayer's money and getting nothing in return.     is your goal a stronger democrat party or stronger country?

Marxist Democrats are PURE EVIL and should be handled with extreme prejudice.

FB equates Conservatives with terrorists
23 hours ago
School Board Covered-up Student Rape, Had Father of Victim Arrested to Keep Him Quiet, Then Labeled Him a Domestic Terrorist
24 hours ago