Despite promising to stop touching young girls inappropriately, former Vice President Joe Biden was yet again caught cozying up to a 10-year-old, whispering comments in her ear, and even asking for her address.

“I’ll bet you’re as bright as you are good-looking,” Biden said to the girl on Tuesday after she asked him a question at an American Federation of Teachers town hall in Houston, Texas.

Creepy Joe also called her “honey“, held her hand, and asked for her address during the interaction in which he told her she is “good looking.”.

He exclaimed when the girl told him that she wanted to be a journalist, and led her over to meet the reporters in the room, before holding her shoulders.

As he introduced the child to the press, he leaned over and whispered in her ear, before finishing his speech.

Some reporters found the exchange rather odd.

Breitbart report: The former vice president earned criticism prior to launching his campaign about his habit of touching women and children in public without their consent.

In April, Biden explained in a video released by the campaign that he would be much more mindful of his behavior in the future.

“The boundaries of protecting personal space have been reset. I get it. I get it. I hear what they’re saying and I understand it,” he said. “I’ll be much more mindful. That’s my responsibility and I’ll meet it.” 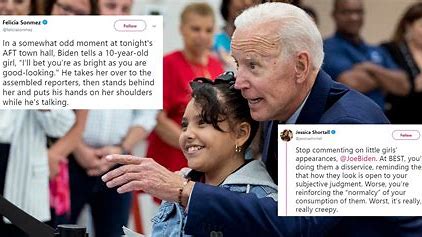 Think of all the little girls that have been saved from his groping hands and ogling eyes since he's been confined to his basement. 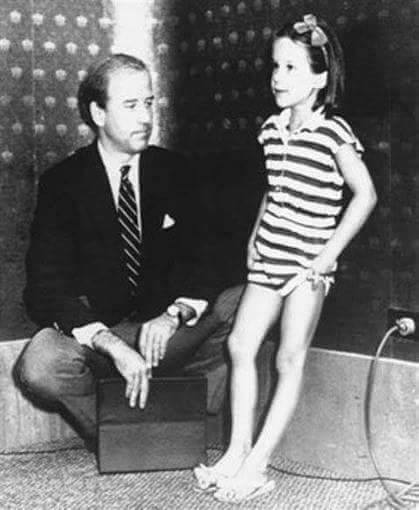 Republicans feign outrage over Biden, while ignoring transgressions by Trump.

Republicans don't even bother hiding their hypocrisy anymore. They put it on full display.

Jack HammerOld Faithful
As well as hundreds of others linked to the DNC Epstein island but still
good to see the pinkish panther has it's nose low to the ground.
8/3/2012:26 PM
❤️ 0
Robot UnicornHall of Famer

Trump named, with Epstein, in 2016 lawsuit over abuse of a minor.
Republicans: Look at Biden.

Hypocrisy is all Republicans have left. Patriotism, truth, and honor have fled the GOP.