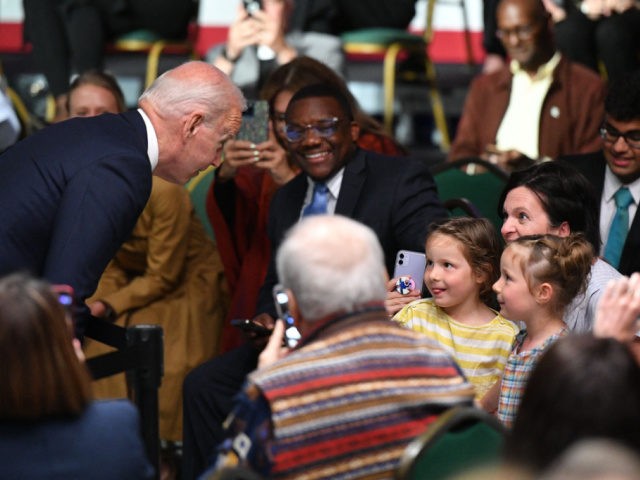 President Joe Biden interrupted a speech in Tulsa, Oklahoma, on Tuesday to speak to two young girls in the audience.

Biden made a face and pointed at the two young girls and said, “I have got to make one check here” and left the stage to walk into the crowd.
When he returned to the podium, Biden continued, “I just had to make sure that two girls got ice cream when this was over.”

“Imagine how excited you would be when you are four, almost five-years-old, coming to hear a president speak,” he said. “My lord. In my faith, we call that purgatory.”

Biden spoke in Tulsa to recognize the 100 year anniversary of the massacre in the Greenwood neighborhood in Tulsa in 1921.

“The events we speak of today took place 100 years ago, and yet I’m the first president in 100 years to come to Tulsa,” Biden said, apparently forgetting that former President Donald Trump held a campaign rally in Tulsa in June 2020. Former President George H.W. Bush also visited Tulsa in 1992.

After the speech, Biden again walked over to the two girls and spoke briefly with them and their mother before exiting the room.

(Most likely to see if he could arrange a date with them).

"My girlfriend called me a pedophile. I said, that's a mighty big word for a nine year old".

Sign In To Reply
Post
'3rd Continental Congress' to convene
4 hours ago
480 arrested in Capitol riot case, including at least 53 who have served in the military
4 hours ago
You can 'thank' a Democrat
5 hours ago
Horrible, Bigot, Murderer
5 hours ago
Putin asks who shot Ashli Babbitt, accuses U.S. of arresting MAGA protesters for political persecution
5 hours ago