You were just supposed to play him on TV.

A famous drama coach said, “When the actor you hired begins to believe he’s the character he plays, fire him.” That’s the trouble with Joe Biden. He believes he really is the president of the United States.

Biden was elected to the Senate in 1972, at the ripe old age of 29, four years after he graduated from law school — lots of real-life experience there. Once he had the Democratic nomination in True-Blue Delaware, he was set for life. In Joe’s case, life was 36 utterly undistinguished years. No one can remember a major bill he sponsored that became law.

The first time he ran for his party’s presidential nomination in 1988, he was forced to quit after it was learned that he’d plagiarized a speech by British Labor Leader Neil Kinnock. Someone smarter would have changed a word here and there, to make it seem original. Someone smarter ain’t Joe Biden, who used it word for word.

Just when it seemed like the rest of his career was destined to be a footnote in history, Barack Obama plucked him out of obscurity to be his running-mate in 2008.

Obama was then untested, having served less than four years in the Senate. He needed to reassure insiders, and who better than good, old reliable Joseph – a Democrat lackey through and through.

His eight years as vice president were marked by a string of successful banquets and funerals. Obama’s assessment of his vice president can be summed up in a remark often attributed to him, “Don’t underestimate Joe’s ability to **** things up.”

In 2020, the future president ran a lackluster campaign for the Democratic presidential nomination. Then Bernie Sanders began moving up in the field.

Terrified that they’d have to run with an avowed socialist at the head of the ticket, the party elite settled on Biden the Bland to stop Bernie the Bolshie. The other candidates were bribed or pressured into dropping out and throwing their support to the Anointed One, including Kamala, who practically accused him of being a racist in one debate.

Once he had the nomination, instead of the proverbial back-porch campaign, with COVID as the excuse, Biden hid in his basement to minimize voters’ exposure to his wit and wisdom.

The party sold him as the adult in the room — a seasoned statesman who would spare us those embarrassing Tweets. “Senior” turned out to be a euphemism for senile.  Instead of a statesman, we got a hack who outsourced his ideas to the DNC.

Still, he did manage to give us a hint of what his presidency would be like when he punched down at a Detroit factory worker who prophetically proclaimed that the candidate wanted to “take away guns.” To this, the future president replied that his questioner was “full of sh-t,” and told him, “Don’t be such a horse’s ass.” With Churchill, Biden will never be confused. Our 46th president mobilized the English language and sent it marching off a cliff.

The lapdog media ran interference for the Democratic nominee, like burying the Hunter laptop scandal and pushing the Steele Dossier, cooked up by Crooked Hillary.

Now we have a president who trips as he tries to walk up the steps of Air Force One, can’t quote the created-equal part of the Declaration of Independence (you know, “the thing”) gets lost on the White House lawn, stares vacantly into space, and had to be led away from a crowd by the Easter Bunny when it looked like he’s going to gaffe again.

There should be a Secretary of Walking Back.

In March, Biden declared that Putin “cannot remain in power.” While the Russian ruler is indeed a wicked man, and we should help Ukraine to defend itself, there’s nothing like poking a bear with a nuclear arsenal.

In March, Pretend President said we would intervene militarily to defend Taiwan from Chinese aggression. (So much for strategic ambiguity.) Beijing can’t be allowed to take Taiwan, but why telegraph your punches?

Of late, the leader of the Free World has fussed and fumed about the tendency of his aides to contradict his offhand comments by explaining what he really meant to say and how it dovetails administration policy.

So, who’s driving White House policy – Bernie Sanders and the Squad, Pelosi and Schumer, the Easter Bunny, or (my personal choice) Barack Obama?

Never in our history has a president managed to screw things up this badly (the withdrawal from Afghanistan, shutting down domestic energy production, inflation, border security, and law enforcement) in so short a period of time. It’s painful to recall that his administration still has over two and a half years to go.

Confronted by multiple crises a home and abroad, never have we needed a steady hand more. Instead, we have an empty suit with an empty head sitting in the Oval Office, or on the “Jeopardy” set, babbling whenever his eyes wander from the teleprompter.

God save the Republic. 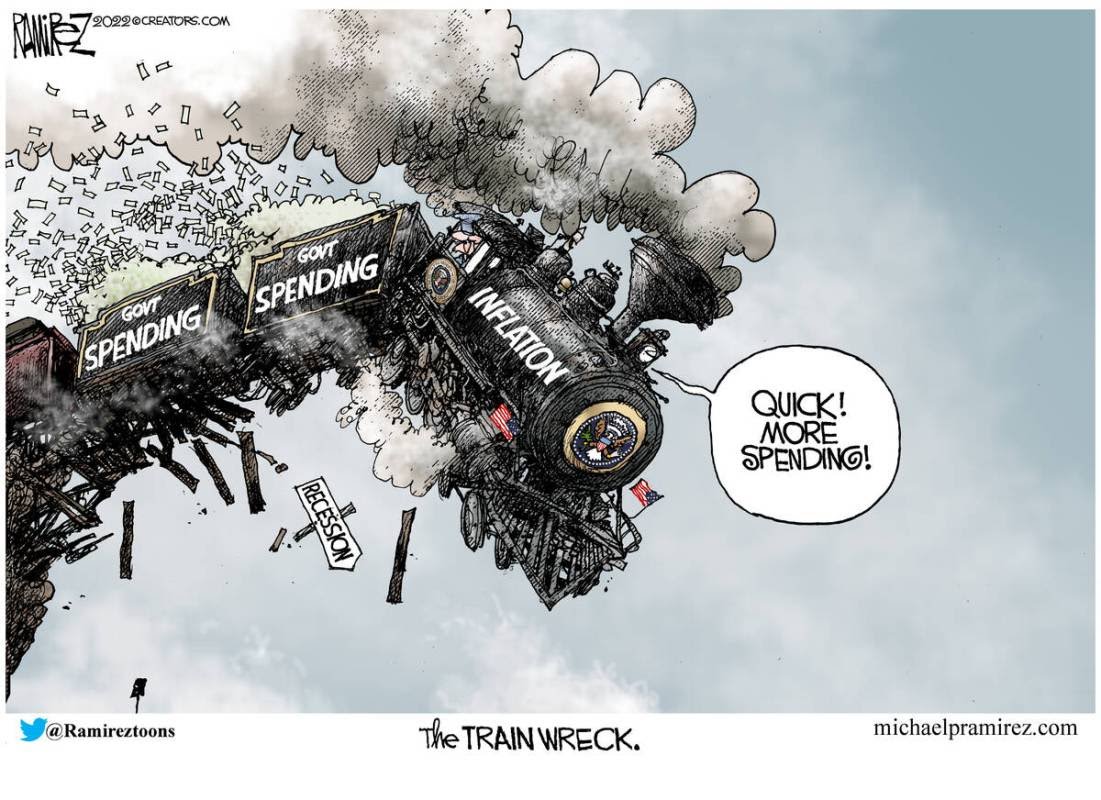