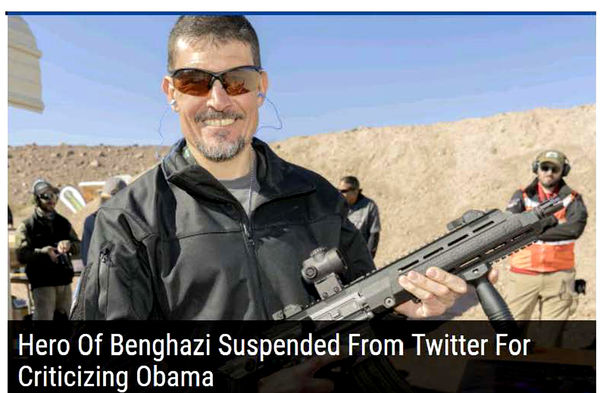 But Barack Obama’s worst lie was his remarks on Benghazi.

Barack Obama: “The politics of division and paranoia has found a home, unfortunately, in the Republican party. … they’ve embraced wild conspiracy theories by those surrounding Benghazi. Or my birth certificate.”

Benghazi hero Kris Paronto responded to the former president. Kris has not forgotten about the men lost as Obama did nothing.

Benghazi is a conspiracy @BarackObama ?! How bout we do this,let’s put your cowardly ass on the top of a roof with 6 of your buddies&shoot rpg’s&Ak47’s at you while terrorists lob 81mm mortars killing 2 of your buddies all while waiting for US support that you never sent#scum

Apparently Kris ‘Tanto’ Paronto can’t defend against the lies so Twitter promptly put him in a timeout.

After being in the @Twitter penalty box for a few and having to delete the below tweet  for offending the leftist hate group @itmustend_  for their epic fail of telling Rob O’Neill that BHusseinObama killed UBL and not him I’m back up..sooo Twitter doesn’t censor ehh @jack ? pic.twitter.com/nLSYRcGr9e

No wonder conservatives feel like America has turned into a rainbow
breeding ground for noe see anti American illegals, misfits and the slime
has turned dangerous... What the cowards will never do again is return
to being a normal citizen ------------
9/10/186:57 PM
❤️ 0
Original Post

My main object concerning Benghazi is not a wide conspiracy.  But, rather the results of Obama's decisions -- a dynamic combination of arrogance and incompetency.

My main object concerning Benghazi is not a wide conspiracy.  But, rather the results of Obama's decisions -- a dynamic combination of arrogance and incompetency.

KravenOld Faithful
The  indictments/proof were there, they were blocked.
With what we learn more of everyday since Nov 2016 is the
complete arrogance, hypocrisy and laws broken to hide the
felonies of the Clinton crime wave that surface daily.
The unredacted evidence and testimonies that could and should
place the entire Clinton campaign behind bars-----
9/11/188:00 AM
❤️ 0

Kraven posted:
The  indictments/proof were there, they were blocked.
With what we learn more of everyday since Nov 2016 is the
complete arrogance, hypocrisy and laws broken to hide the
felonies of the Clinton crime wave that surface daily.
The unredacted evidence and testimonies that could and should
place the entire Clinton campaign behind bars-----

Not according to the people who make the decisions. Republicans have been trying to find a reason to prosecute the Clintons for in excess of 20 years. Either Republicans are that inept or there's nothing to prosecute.

Obama, at the suggest of Secretary Clinton and the French president, directed the overthrow of Qaddafi.  Despite the fact that Qaddafi had already turned his nuclear arsenal over to the US. Plus, bitter experience has shown that overthrowing one such dictator either, releases chaos or someone worse takes over.

Observe the immediate effects.  Libya in chaos.  Most other nations evacuate their embassies -- not the US.  US embassy and other buildings are left with only small security details despite repeated requests for more guards.  The ambassador is murdered, as well as, other personnel.  Obama, knowing, repeatedly lies to the public blaming the violence on a film on the internet.

Long term effects -- other thug nations realize having a nuclear arsenal is an insurance policy against the US overthrowing their regimes -- North Korea and Iran keep planning their nuclear arsenals.

Obama and Hillary both examples of a dynamic combination of arrogance and incompetence.

Rep. Waltz to Newsmax TV: Shoplifters Given More Due Process Than President
1 hour ago

Separated at birth
20 hours ago