More on the trash son of the trash that is in our WH! Joe gave this mess his blessings. A pedo 'president' that approves an affair between a son and a dead son's wife...an old demented man that professes to be a loving grandfather that won't acknowledge the grandchild in Arkansas...and protects and threatens countries over a dope head son...a woman with zero qualifications and who slept her way  to 'the top'. This is the pure TRASH that is in our WH and we are already suffering greatly for it. They are ruining the country at 'warp speed'.

'Your denials of the cheating and what now appears to be an affair. I have woken up to my reality. No one should be treated the way you have treated me,' Kathleen Biden wrote. 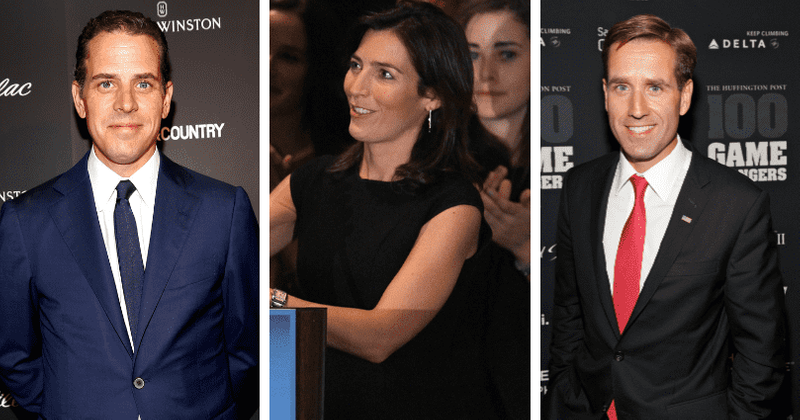 President Joe Biden's son, Hunter Biden, has time and again stressed the fact that he had a brief affair with his brother Beau's widow, Hallie, after her husband died. However, emails sent by Hunter's ex-wife, Kathleen Biden, appear to prove that the timeline mentioned by him might not have been entirely accurate after all.

After Hunter's new memoir, 'Beautiful Things,' which comes out on April 6, revealed that Kathleen found the tell-tale texts on Hunter's old iPad, which sparked their final split, the Daily Mail obtained a number of emails sent by Kathleen Biden in July 2016 showing the aftermath of her reported discovery of romantic texts between her husband and Hallie. She lashes out at Hunter, accusing her then-husband of cheating and buying gifts for his mistress.

"I'm leaving you because you are having an affair and you have been emotionally abusive," Kathleen wrote on July 28, 2016. "You say you were surprised by my asking for a separation and needed time to process it. I was surprised when I found your bottles of ****ra and Cialis. I was surprised when I found airline purchases and jewelry purchases." Hunter and Kathleen's relationship was struggling ever since Beau died of brain cancer on May 30, 2015. Hunter started grappling with addiction — something he had battled with his entire life — again, a couple of months after his brother's death, and moved out of their marital home after breaking his sobriety pact with Kathleen, according to his 2019 New Yorker interview.

Hunter's 'a sicko' (Just like his old man Joe)

According to divorce papers, the couple officially parted ways in the October of the same year. The final straw, according to Hallie, was her discovery of romantic texts between Hunter and Hallie, which is documented in the memoir. "The book admits that this was the final straw for Kathleen," a publishing source told The Sun. "She'd tried for years to help him beat his addiction to crack cocaine and booze. But then she found out he was sleeping with his brother's wife. She said he was a sicko."

The emails sent by Hallie also reveal that she might have been at a breaking point with Hunter. In an email titled 'Final words,' Kathleen wrote, "Hunter, you cheated on me. You continued to cheat on me while I worked with [medical professionals] Kolmac, Debbie, etc to get you help. Not only did you cheat on me, ****ra and Cialis, you actually bought her expensive gifts. I am stronger than you think. I'm not standing by while you treat me like dirt. I lost Beau, I lost my husband, I lost the family that I thought was mine. I continue to try and continue to feel like I am making things worse. I am finished." When Kathleen reportedly confronted Hunter about his alleged infidelity, he apparently told her that she was "crazy" and taunted her about his late brother and Beau's children Natalie and Hunter. "I've had some time for the reality of what you've done to sink in. I've been able to really reflect on how you've treated me and realize the emotional abuse you have subjected me to over the past year. Your taunts about Beau, Natalie and Hunter," she wrote. "Your telling me that I'm crazy — that everyone is mad at me and the girls worried about me. Your denials of the cheating and what now appears to be an affair. I have woken up to my reality. No one should be treated the way you have treated me. I won't take it anymore."

Did Hunter have an affair with Hallie while Beau was alive?

Some of the wordings in Kathleen's emails suggest that Hunter's affair with Hallie started before the death of Beau, which would effectively mean that he lied about the timeline of his romance with her.

The president's son claimed in his 2019 New Yorker interview that he did not get romantically involved with Hallie until August 2016, when he vacationed in the Hamptons with his sister-in-law and her children. He told the magazine that it was only when Hallie flew to meet Hunter after he got out of rehab in Arizona, that their romantic relationship began, which was in the fall of that year. Kathleen filed for divorce on December 9, 2016, and his relationship with Hallie was publicly revealed on March 1 the following year.

He also hinted at a similar timeline in his memoir. "Feeling physically and mentally purged, I phoned Hallie and asked if she would come to Arizona to pick me up. I wanted her to accompany me on the trip back,” Hunter wrote in 'Beautiful Things'. "I didn’t trust myself to make it home without backsliding — without taking a detour into the pit I fell into on my way there. She flew out the next day. I was at my lowest, she was at her neediest, and we clung to each other with abandon. We talked at length about how much we had come to rely on each other, how our health and well-being seemed dependent on the love we’d grown to share."

“There’s no question about the unseen force in the middle of it all: Beau,” Hunter wrote, adding that the pair believed at the time that they could keep Beau alive by being together, “that by loving each other we somehow could love him back into existence.”

“By the time we returned to Delaware at the end of the week, we were no longer just two people bound by shared grief. We were a couple,” the president’s son said.

Rumors are... Trump has an ongoing affair with Jared Kushner's wife.

Hunter Biden and Beau's wife got together so fast that their first date after Beau died was to Beau's funeral.

Trump started with Kushner's wife, when she was so young... Epstein was jealous.

What WASN’T in Hunter Biden’s book: How he got unauthorized Secret Service protection, begged Joe to run for WH to salvage his own reputation and made **** films with prostitutes