JutuOld Faithful
Restoring the nation’s soul by ginning up
fear, hatred, and suspicion. The funniest **** thing about Joe Biden’s campaign for president was his claim that he would restore the soul of America.

If you do a Duck-Duck-Go search on “Joe Biden”+”Restore the soul of America,” you’ll find link after link from American corporate news outlets who ate up with a soon his cravenly dishonest pledge.

A man who spent half of his life in Washington DC hurling vicious, slanderous attacks at his opponents and lying about his own biography was going to restore the soul of America. It’s hilarious how many people believed that.

A man who routinely accuses black people of being too dumb and backward to get on the internet or hire a lawyer or accountant – is that how you restore the soul of America?

Accusing Republicans of being like the Jim Crow-era Southern Democrats and the KKK – is that how you restore the soul of America?

Then again, since Joe Biden believes that America’s founding is rooted in systemic racism, perhaps it makes sense that his idea of restoring the soul of America is to irreparably divide us and turn American against American, children against parents, and blacks against whites.

Yesterday Joe flew to the city where our Republic was born to deliver the most divisive, angry, slanderous speech any American President has ever given. Burping out hyperbole after hyperbole, this “Great Uniter” accused states with election integrity laws of causing a crisis in America worse than the Civil War, “And that’s not hyperbole,” the stupid, foolish, angry old crock added.

Didn’t Joe go down to Tulsa and claim that the three-hour melee at the Capitol on January 6 was the worst thing since the Civil War? I guess “Worse than Watergate” is all played out.

One part of that speech was true: Bullies and merchants of lies are in fact threatening the foundation of our country. But the guy who uttered those words is actually Chief Merchant of Lies.

He lies about what these election integrity laws are.

He lies about the “danger.”

He lies about everything. He’ll slander and defame anyone; he doesn’t care.

This man is an ugly, angry, mean-spirited ***hole.

And here’s the thing. He always has been. This isn’t anything new. If you’re old enough to remember the 1980s, you remember the way he treated Clarence Thomas during his Supreme Court nomination.

Hell, if you’re old enough to remember 2020, you remember how he got in the faces of ordinary citizens and hurled insults at them for daring to question him. The only thing he’s trying to do is fearmonger, divide and attack in hopes that his divisive rhetoric and lies help the Democrat Party maintain its grip on power.

He’s ginning up the basest instincts of humanity – fear, hatred, and suspicion.

This man has no conscience. He has no honor.

And his soul is so black, it doesn’t know how to hire a lawyer or an accountant … or get on the internet.

After 4 years of Trump insulting anyone who didn't agree with him or support his incessant lying... Republicans are upset over Biden's speech pointing out Republican hypocrisy. Oh how horrible. hahahahahahahaha!

Joe Biden: "Hunter is the smartest man I know".

Hunter: "I spent more time on my hands & knees picking through rugs, smoking anything that even remotely resembled crack cocaine. I probably smoked more Parmesan cheese than anyone that you know, Tracy." They filed charges on another of Trump's traitors, yesterday... and here we are worried about Hunter Biden... I wonder political office Hunter holds? 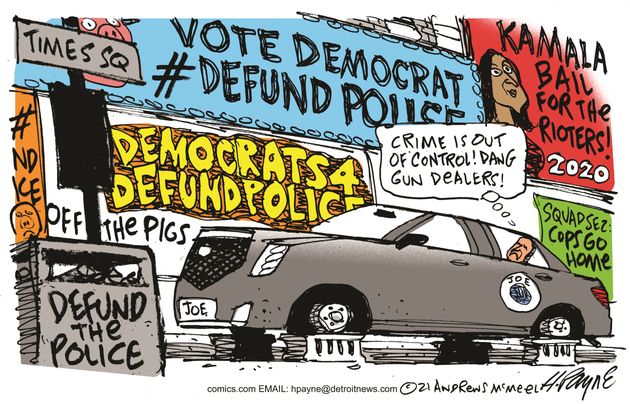 Joe Biden Snaps at Another Female Reporter
8 hours ago

As libs move to take away more and more of your rights and freedoms...consider this...
8 hours ago