Ms, everyone is responsible except me, Clinton is now trying to get Facebook to own up to "Fake News" that surely affected her campaign and played a part in her losing the election to Donald Trump.  I mean is there anyone that has escaped Hillary's blame (other  than herself of course)?  For Republicans the thought that she might actually run again in 2020 is surely the gift that keeps on giving.

You know Bill takes a lot of heat for his escapades with Monica and the many, many, many, many, many (did I say many) women that he has entertained up to and including the newest/current "Energizer Bunny" as coined by the Secret Service agents that guard him these days.  When you take Hillary and look at her and listen to her can you really not make a case of why Bill might seek company with another female?  Mind you I'm not trying to justify anything or condone on such activity but we are seeing a few sides of Hillary one can only imagine what she is really like in person.

There were leaks, coming from the Secret Service, about how so many of them tried to get other details and how Hillary berated them constantly as well as others that worked for her.  There is no doubt that she considers herself so far above the average citizen and person that it's not difficult to see how she expects to get away with anything, and she usually does.  She laid quite low after the election sobbing up and soaking her wounds but I think also that she was afraid that now that she lost and Donald Trump won that possibly the new Attorney General would be coming after her and that all her Monopoly get out of Jail card free privileges might have been fading away.

I think much of her brash talking and public appearances and getting back into the game comes because she has a new emboldened attitude that still she will be able to get away with anything and that nothing is and will be made of all those indiscretions of the past.  She's just not a nice person and America dodged a huge bullet when she was defeated by Trump  One can only imagine what she would have done had she been elected and how much more damage she would have and could have done even with a Republican majority in Congress.  Not that a Republican majority is anything to boast about.

How about the fake news the demoslops spread about Trump and his supporters? Not only do they do it on face book, but on liberal blogs and fake news sites, and email. 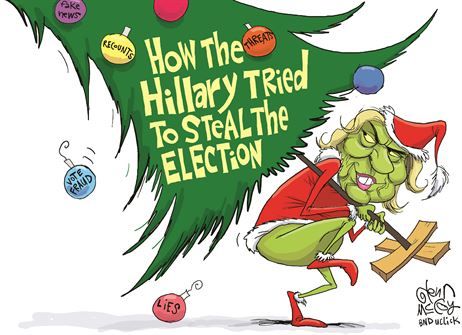