Where was twitter all last year? We know...supporting and allowing antifa and blm to use their outlet to plan their riots and other acts of violence and insurrection against the US and president Trump. Now dems have to do clean up and scrub away all they can of their part in those riots and insurrection. Too bad for them that won't work. The monster they made is turning on them....or so we're led to believe. Antifa did nothing any different infrauduration day than they have done...or worse... at other riots....the problem this time? They supposedly targeted democrats. I wonder if Kamala is still bailing them out. We know neither she or Biden have condemned them. Far from it...they support them.

Twitter has suspended antifa-linked accounts with more than 71,000 followers after Inauguration Day riots in Seattle and Portland that targeted the Democratic Party headquarters and Immigrational and Customs Enforcement offices.

The accounts linked to the militant far-left antifa that were suspended included @JewishWorker, @RevAbolition, @RevAbolitionNYC and @TheBaseBK, Andy Ngo of the conservative blog The Post Millennial reported.

Ngo characterized TheBaseBK, a self-described anarchist political center, as an ''extremist bookstore in Brooklyn, NY that has been used as an antifa training center.''

Two others were arrested in Seattle, where rioters smashed windows of several businesses, including a Starbucks restaurant.

''Our comrades w The Base (@TheBasebk), an anarchist social center in Brooklyn, NY of 9 years now took this Twitter thing seriously,'' it wrote. ''Reaching a platform of 17k followers they pushed a very specific line where politics were never blurred. Today, Twitter took their account down, and now theres a void.

''The Base took the same approach to Twitter as they do in the struggle for liberation," it added. "As anarchists they take a stand & never waver. Its inspiring. And we encourage everyone to check their site now & periodically **************Solidarity forever!''

Several cities, but Portland and Seattle especially, have experienced riots since the beginning of the summer following the death of a Black man in police custody in Minneapolis. President Joe Biden famously called antifa a ''movement'' but not an organization during the presidential debate with then-President Donald Trump in September. 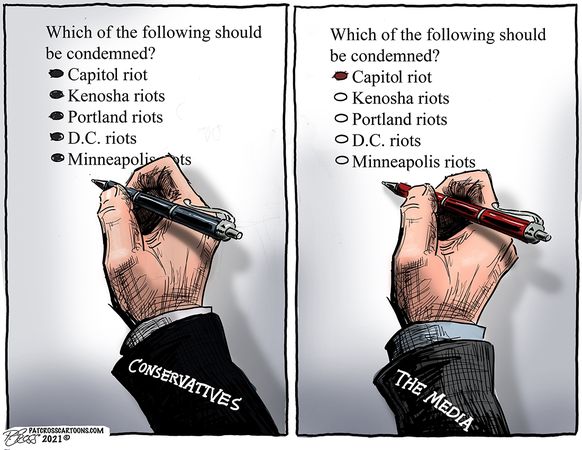 Is this satire? lol

When will mo brooks resign?

Sign In To Reply
Post
Anti-Trump sentiment, not science, may be behind Dems’ school closures, liberal NY Times columnist writes
34 minutes ago

Family of fallen Capitol police officer says cause of death unknown-stop making it political.
2 days ago