The left is pretending to be all insulted about a photo shopped picture!!! First they were upset that Trump and others were happy about Baghdadi's death...then they took offense at his saying Baghdadi died "like a dog" (claims it is offensive to dogs and proves Trump actually hates dogs)...now this.

The mainstream media had a very serious reaction to President Trump's not-so-serious tweet showing him honoring the dog wounded in the takedown of Islamic State terror leader Abu Bakr al-Baghdadi.

Last weekend, Baghdadi reportedly spent his last moments running from the dog before committing suicide. When he detonated his suicide vest, he killed his two children and injured the heroic K-9 in the process.

On Wednesday, Trump shared an edited image, which apparently originated from The Daily Wire's social media account, showing him putting a paw-print medal on the dog as if it had taken place at a White House Medal of Honor ceremony.

His tweet came just hours before the White House's ceremony scheduled for Wednesday. 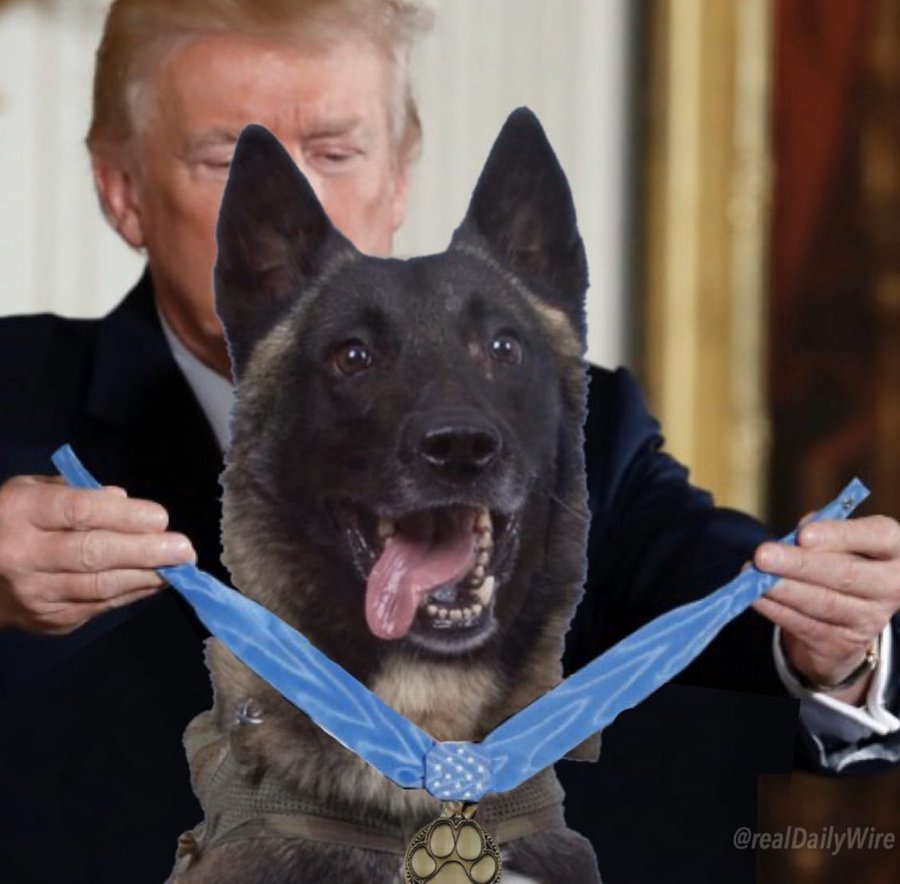 134K people are talking about this

However, some in the media apparently weren't in on the joke.

Both The Washington Post and The New York Times offered reports on the "faked" photograph, explaining that the origins of the image came from a 2017 Medal of Honor ceremony for Vietnam War Army Medic James McCloughan.

"In a somber White House ceremony in July 2017, President Trump draped the Medal of Honor around the neck of James McCloughan. He was credited with saving the lives of 10 men in a brutal, days-long battle in Vietnam, and Trump told the former Army medic that 'we are in awe of your actions and your bravery,'" the Post began its report. "On Wednesday, Trump posted a photo of that moment with McCloughan’s image replaced by that of a dog."

The Times went even further and reportedly included McCloughan's reaction to the image.

"In a phone interview on Wednesday, Mr. McCloughan, 73, who had not seen the image before a reporter sent it to him, said that he interpreted it as Mr. Trump recognizing the dog’s heroism," the Times reported. "He certainly was not offended and laughed when he compared the two images."

"After all, he said, Medal of Honor recipients accept on behalf of their entire teams, especially those that did not return from battle. And canines have long been part of war efforts."

CNN's chief White House correspondent Jim Acosta offered a development, reporting that a White House official said, "the dog is not at the WH."

Voice of America's White House bureau chief "requested details" from the Trump administration about the photo.

"There was no such canine event on today's @POTUS schedule but there is a Medal of Honor ceremony set here for later today for an active duty Green Beret," Steve Herman told his followers.

He confirmed with the White House that the image was, in fact, "photoshopped."

I've requested details from the @WhiteHouse on this photo.
There was no such canine event on today's @POTUS schedule but there is a Medal of Honor ceremony set here for later today for an active duty Green Beret. https://twitter.com/realDonaldTrump/status/1189601417469841409 …

15.9K people are talking about this

"Fine, just the president of the United States disseminating a doctored image created by a right-wing propaganda site," Dáte wrote.

Mother Jones editor-in-chief Clara Jeffery accused Trump of "s----ing on the vets again, but in a whole new way."

"It's just misleading," Hahn tweeted. "Obviously it is doctored but to be tweeted out like that without context makes people believe it's real, and from the other responses, people do actually think that."

Over the weekend, Trump praised the dog; its name has remained classified.

"Our K-9, as they call it, I call it a dog," Trump said during his press conference Sunday. "A beautiful dog, a talented dog- was injured and brought back."

Jack HammerOld Faithful
The MSM is stupid, anyone can post a joke and they go postal, only
because they need to believe every lie no matter what it is. MSM is
The joke, the lie, idiots and non professional fools that hasn't been
seem like in how many years.?? Trump doesn't let it bother him and
that makes it worst on them.
10/31/198:20 PM
❤️ 0

I do wonder why they named the female "Conan". I am surprised the left hasn't had riots over them "appropriating" a male name for a female doggy.

Jack HammerOld Faithful
I could tell the second I saw her face it was a female, I might've been
drunk, don't remember.
11/1/1910:33 AM
❤️ 0
WELLFamiliar Face

I do wonder why they named the female "Conan". I am surprised the left hasn't had riots over them "appropriating" a male name for a female doggy.