Just ignorance...bad taste...and a waste of taxpayer's money! Did the artist add a counterfeit twenty and a bag of drugs??

The sculpture, which is 700 pounds and made of bronze, commemorates Floyd’s death after he was pinned down by a Minneapolis police officer in May 2020. The statue will be in the city for at least a year, according to CBS News.

“George Floyd represents a lot more than himself at this point, at this juncture in history. Congress is contemplating a George Floyd in policing bill right now. All of the activity that took place around this country around the world because of the untimely and ferocious and vicious death — murder — of George Floyd and all of the activism that sparked out of it, you know, is worth us pausing and paying attention to,” Baraka said during the unveiling.

The artwork was commissioned by filmmaker Leon Pickney and made by artist Stanley Watts.

During the conference, Baraka spoke about how Emmett Till’s death and the activism of Till’s mother and others helped spark the civil rights movement, and said that “we believe George Floyd has the same impact that today as Emmett Till's death did then.”

The mayor hoped that people walking past the artwork would be inspired to bring about their own change in the city and state. 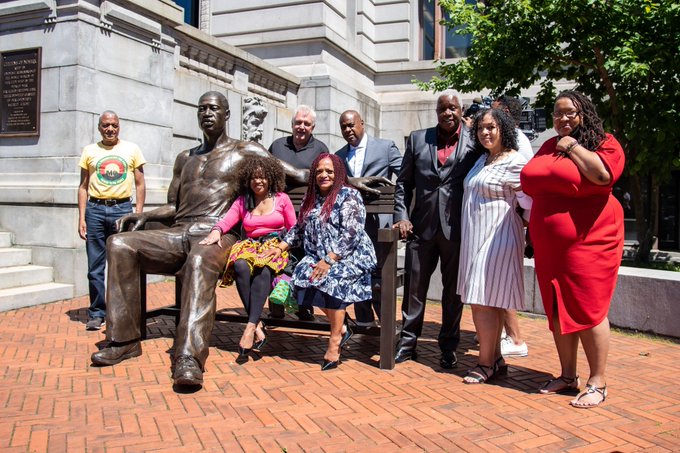 Maybe as someone suggested...inspires them to do something about drugs/drug users and career criminals like Floyd.

Pope Francis announced George Floyd was a martyr of social justice and will be named the patron saint of fentanyl. The ceremony was held on his feast day, May 25 at The Vatican, the anniversary of Floyd’s martyrdom. The Floyd family said...“Sure George was a career criminal and had no empathy or compassion for the lives of others, but if you take all that stuff out, he was a really a saint of a man.”

Pope Francis has also approved the in memorium prayer for the ceremony:

Our George, who art in Heaven, Hallowed be thy name; Thy riots come; Thy will be done on earth as it is in Heaven. Give us this day our daily fentanyl; And forgive us our white privilege, As we forgive those BLM activists who trespass against us; And lead us not into the truth, But deliver us from reality.

Joe Biden: "They killed George Floyd? I knew him well...he was my friend.  Man he was a great boxer, I don't see how they got him down."

It all started with the Obamanation administration. Obamanation set racism and stupidity back 50 years!!!!