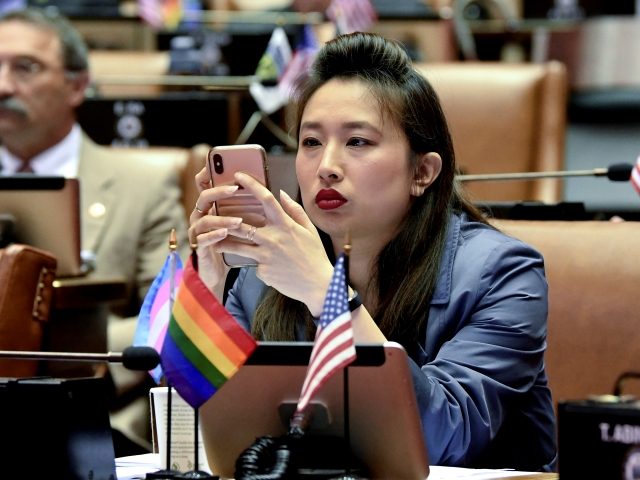 In today’s edition of I-Can’t-Wait-To-Vote-This-November, we have the story of New York Assemblywoman Yuh-Line Niou (D-Lower Manhattan), a “defund the police” fanatic who we now know moved to a safer area due to crime problems in her old neighborhood.

You see, when you can afford to move to a nicer neighborhood, you can also afford to call for the end of policing. Hey, it won’t hurt me!

A left-wing state lawmaker who has pushed for cutting police funding first moved to the district she is seeking to represent in Congress because “safety issues” near “the projects” in Harlem prompted her to shack up with her tech bro then-fiancé in the Financial District, The Post has learned.

Assemblywoman Yuh-Line Niou (D-Lower Manhattan) told a local publication in 2016 — when she was campaigning to initially get elected to her current seat — that she headed to the wealthier Manhattan neighborhood because she witnessed a pair of disturbing crimes and fell victim to one.

“I actually was robbed when I was living in Harlem. My boyfriend at the time, my fiancé, didn’t think I was safe up there, so he told me to move in, and so that’s how I moved to the Financial District with him,” she explained in an interview with the Lo-Down NY. “He was already living there.”

This epitomizes the phenomenon of the “limousine liberal,” the leftists who don’t have to live with the consequences of their disastrous policies. You see, she has the resources and connections to flee a high-crime area. The people that do not have her resources? The people who are stuck in those high-crime areas? Well, they can suck on it because she needs to be trendy with the whole we-don’t-need-police-movement.

Yeah, well, you don’t, sweetheart. You got yours. So screw the little people, right?

Poll after poll after poll shows that no one in the real world wants less policing. Voters don’t. Democrats voters don’t. Black voters don’t. Only bubbled, sociopathic, left-wing elites who live in safe neighborhoods want the police defunded. You see, they just don’t care about their constituents. All they care about is appeasing their left-wing donors among the Beautiful People, who are all bubbled, sociopaths who live in safe neighborhoods.

You want to hurt poor people? Defund the police.

You want to hurt a disproportionate number of black people? Defund the police.

You want to decimate poor and working-class neighborhoods? Defund the police.

And that’s what lunatics like Niou want. She and monsters like George Soros (who’s been funding pro-crime district attorneys all over the country) believe the Revolucion! will result from this chaos. Hey, so what if a few more women get raped and a few more young black men are shot and killed… It’s all for The Cause.

You get what you vote for, morons.