"This whole thing has been a sham," she said on "Fox & Friends. "It started in the bunkers of the Capitol, shrouded in secrecy. That secrecy has continued," said Bondi, who is now a White House special adviser.

"[The new United States-Mexico-Canada Agreement] USMCA ... could bring over 176,000 jobs — billions of dollars to our economy is sitting on Nancy Pelosi’s desk collecting dust because they won’t do anything positive because they are dead set on taking out our great president. And we're not going to let it happen," Bondi added.

Bondi also said it would be irresponsible for Democrats to censure Trump because they have yet to prove he has done anything that warrants punishment.

"The president did everything right and they continue to attack us every day. Censure is not appropriate — not acceptable."

Some have proposed Democrats consider issuing a formal censure to Trump for his telephone conversation with the Ukrainian president, rather than moving forward with articles of impeachment.

Trump referenced House Intelligence Committee Chairman Adam Schiff, D-Calif., during his trip to London on Tuesday, and called him a "deranged human being."

Jack HammerOld Faithful
D'Rats will have nothing to do with success unless they are in office,
the thing is neither side has had any success to speak of since the 80's.
Both sides just hate when a Anti- deep state swamp toad has had more
accomplishments and prosperity that the Country continues to benefit
from and they just can't shake it off.
12/3/195:30 PM
❤️ 0 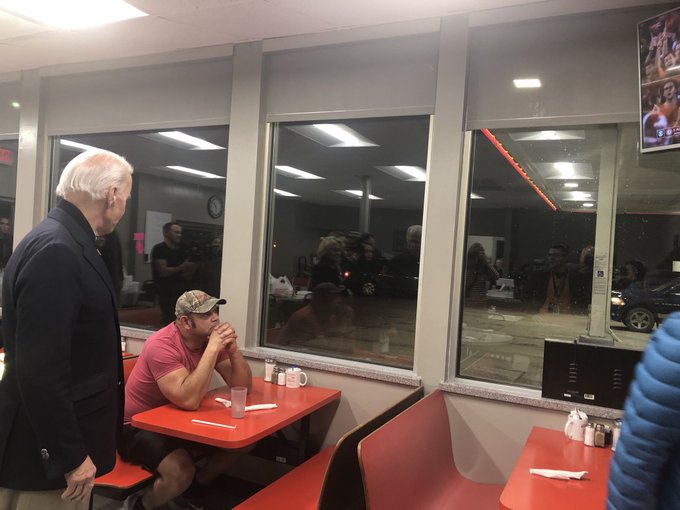 Natasha Korecki
✔@natashakorecki
That time when former VP @joebiden is standing right next to you at the Corn Stalk Cafe and you just don’t care.
(Biden has no business in that cafe).........

The farmer had no idea Joe Biden was standing next to him and didn’t seem to care.

Korecki asked the farmer if he knew who was standing next to him in the restaurant.
His response was epic!

I ask the guy if he just wasn’t a fan of Biden’s and he says “who?” I say the former VP. The man, who farms in the Missouri Valley says he’s never heard of Joe Biden.

Natasha Korecki
He says “are you serious?” When I say he was Obama’s veep, I get an “ohhhhh. I’m not an Obama fan. This is Republican country.”

He says “are you serious?” When I say he was Obama’s veep, I get an “ohhhhh. I’m not an Obama fan. This is Republican country.”

He did go on a rant and threaten the restaurant for allowing Biden in? You know...like the left does when any Republican is in public.