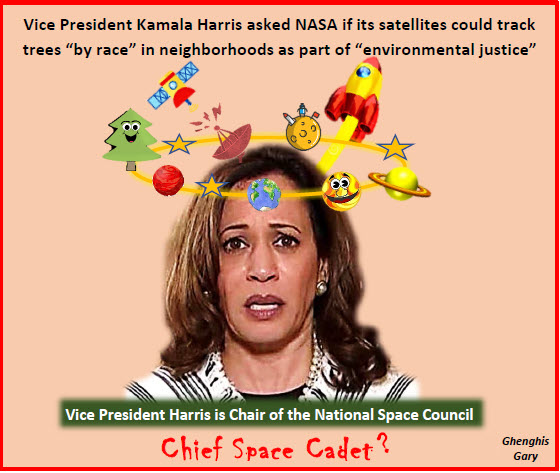 Peggy Noonan doesn’t always get it right (no one does) but when she does, liberal heads explode. Case in point, her column this week for the Wall Street Journal. Noonan hits the nail on the head with her brutally honest assessment of Kamala Harris as vice-president. Leftists are in need of a safe space.

The purpose of the column is to point out that Kamala is rightly being criticized for her unseriousness and incompetence in office. Americans are worried about that because it is a threat to our country. She is a heartbeat away from being the most powerful politician on earth and we have no confidence in her ability to handle that. Sleepy Joe may not be able to fulfill his full term in office – not just because we can see him mentally slipping – but because the reality is that he is the oldest person to serve as president and he’s 79 years old. He has a medical history that may be problematic as he ages. Things happen, even with the most healthy among us. So, it is Kamala’s job to rise to the occasion and show America and the world that she can step in if anything happens.

We’ve seen the stories about Kamala’s bad poll numbers. She polls lower than Biden. It is unusual for a vice-president to poll lower than the president. Her staff is leaking stories of her bad management style and top staffers are leaving. The story that she doesn’t properly prepare for meetings by studying briefing books put together for her by her staff is particularly disturbing. Kamala brought in some outside help to turn around the problems in her office but so far none of their advice is working out.

Noonan points out that the abundance of stories about Kamala’s incompetence will ease soon and she will be left for dead, politically speaking. This amount of constant bad press can’t last forever, especially with the media being given marching orders by Team Biden on how to cover the administration. So, Noonan makes some suggestions for Kamala to follow while she is dead, a way to come back from it. Expectations are low and people who know her are saying she is incapable of deep change so it isn’t likely Kamala will take to heart any advice from anyone, especially a white Republican woman writer.

Anyway, Noonan points to Kamala’s trip to Guatemala and Mexico as the point when we saw how unprepared she is for her job. She notes how unprepared Kamala looked during press conferences. Kamala kept rattling on about “root causes” of illegal immigration to the United States which is a lazy way to discuss the problem. We all know about root causes that make people leave their home country for America. They want a better life, job opportunities, America’s social safety net, and the American Dream that anything is possible. “Studying “root causes” is a way of saying you want to look busy while you do nothing.” Of Kamala, Noonan said what I often do of the Biden administration, she appears not just incompetent but unserious.

Some suggestions offered include that Kamala understands her job. She is there to help promote the president’s agenda. She tends to put her focus on the politics of issues instead of the policy issues themselves.

We face grave challenges—China, Russia, the endurance of the American economy. Who leads us matters. Ms. Harris should set her mind primarily on the deep and profound responsibilities of the job she may have to fill. She should do this as an act of will. Only secondarily should she be thinking about her political prospects.

She seems to have the order confused. And when that is true everybody can tell.

Second, she must make herself useful. She’s there to help the president. Recent vice presidents who were good at their job and evaded this kind of criticism were longtime Washington hands who made their experience useful to the president, helping him navigate the town, find old levers, forge new relationships. George H.W. Bush did this for Californian Ronald Reagan ; Al Gore knew things that benefited Bill Clinton, former governor of Arkansas.

The Washington insider path is closed to Ms. Harris because she’s relatively new to town and her president’s experience dwarfs hers.

Kamala makes her appearances on behalf of the administration – limited as they are – all about herself and her future. She was caught using actors to talk about science and STEM education with students, she made a stop at a local New Jersey bakery, and she purchased cookware in Paris, for example. All of those stories could be legit for a vice-president but they all came off as more campaign-like stories than stories of an active and involved vice-president. She’s not on the campaign trail anymore, she is in the office.

Noonan advises Kamala to get serious and to appear humble. It’s not all about you, Kamala.

To do this Ms. Harris would have to decide to become serious—to inform and immerse herself, meet with party thinkers, study her briefing books. Her current strategy, to the extent it exists, appears to rely on her sense of her own personal charisma—delighted laughter, attempts to connect personally, to convey zest.

She should speak instead with sincerity and depth. She shouldn’t confuse Happy Warrior with Hungry Operative.

Ms. Harris has never seemed especially earnest. This would be a good time for earnestness.

The reaction from the left is predictable. How dare Peggy Noonan criticize Kamala Harris? The usual charges of racism and sexism are lobbed. Here’s the thing- the reason Kamala is criticized is that she is not up to the job and it shows. It isn’t about race or gender, it is about the ability to do the job. Was it racist and sexist when she quickly flamed out as a presidential candidate? No. It was because she is a really bad political candidate. The same happened with Hillary. She, along with her supporters, blame sexism for her failure to win the presidential election. She, too, can point the finger of blame squarely at herself. Hillary is a really bad candidate, too. Liberal feminists have to stop playing this game when they fail because it does their demand for equality in the workplace no good. Kamala doesn’t get a pass because of her skin color or for being a woman, even the first black/Asian American woman vice-president.

This is typical of leftist reactions. Most were obscene. Telling her to humble herself is not a racist thing, it is how public servants are supposed to conduct themselves. She should admit to her faults and missteps and then correct them. Peggy Noonan is right.