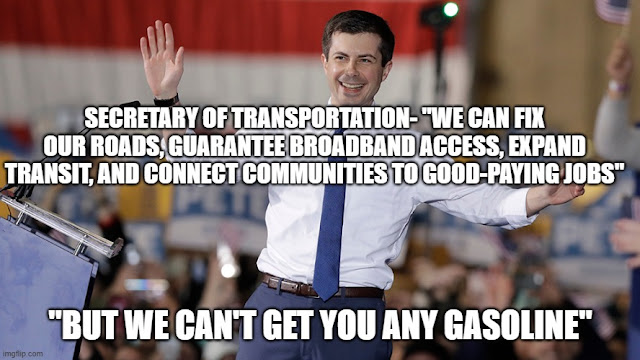 Buttigieg was appointed to the cabinet-level role despite lack of experience in the field, likely because the erstwhile mayor suspended his presidential candidacy and endorsed then-candidate Joe Biden days before Super Tuesday last year.

The country is seeing major delays in supply chains, causing some to ask whether Buttigieg’s inexperience could worsen the situation.

“Pete Buttigieg was completely unqualified to serve as Secretary of Transportation,” Sen. Tom Cotton tweeted earlier this week. “Now, Pete is absent during a transportation crisis that is hurting working-class Americans.” On Wednesday, the Arkansan and potential 2024 presidential candidate, went on Fox News and followed up on his critique.

Pete Buttigieg couldn’t organize a one car funeral—he’s not going to organize our ports, railroads, highways, and airports.

With hundreds of large ships stuck for weeks near the California coast waiting to unload goods, Biden on Wednesday announced that the Port of Los Angeles finally would move to a 24/7-work schedule to alleviate the chaos. He also thanked his “Supply Chain Disruption Task Force,” which has apparently existed for months, though almost no one knew about. The president has been increasingly unwilling to take reporters’ questions this week.

Some Republicans blame the administration and Congress for focusing too much on passing the president’s multi-trillion-dollar infrastructure boondoggle instead of more pressing issues.

“There is more that the Department of Transportation can and should be doing to help address ongoing supply issues related to the pandemic,” Wyoming Sen. Cynthia Lummis told the Washington Examiner. “We’re well over a year into this, and I’m concerned that the Biden administration seems more focused on pushing Congress to massively expand the federal bureaucracy rather than using their existing authorities to help American businesses and consumers get back to normal.”

Buttigieg rushed to CNN Wednesday to defend the administration’s efforts.

“It’s one of the reasons why this entire year we have been talking about and working on infrastructure and are eager to see Congress to act to get this infrastructure deal through,” he argued. “This is a largely private-sector system, and a global one at that, but there are a lot of steps that we can take as an administration, as an honest broker.”