Hillary is determined to stay in the limelight, but liberals say it is Republicans bringing her up all the time. IF she would go away and stay away I would be glad to never have to think of her, or mention her, again.

If we’ve learned anything about Hillary Rodham Clinton over the last 30 years, it is this: when her lips are moving, chances are better than not that she’s lying. At the very least, she carefully couches her words and is disingenuous as hell. At her relative worst, it is Hillary who is guilty of the very charges she trumps up (pun intended) against her adversaries. It is from this viewpoint that I write this political analysis.

During an interview with the Financial Times about the state of the Biden presidency, former President Donald Trump, her own political career, the 2024 presidential race, Hillary is asked the question:

Might Hillary run in 2024, which would be her third effort, depending on how things play out for Biden?

Asked flat-out whether she could foresee any circumstances in which she’d throw her hat into the 2024 ring, she declares:

No, out of the question. First of all, I expect Biden to run. He certainly intends to run. It would be very disruptive to challenge that.

Calling the notion of a Republican winning the presidency in 2024 “so frightening,” as transcribed by Fox News, Hillary went full-metal hyperbolic about “standing on the precipice of losing our democracy.”

We are standing on the precipice of losing our democracy, and everything that everybody else cares about then goes out the window.

Look, the most important thing is to win the next election. The alternative is so frightening that whatever does not help you win should not be a priority.

Before we continue, lemme fix that last line — “whatever does not help you win should not be a priority” — for Hillary: “You should do whatever you must do to win. At any cost. That should be your only priority.”

There, much better. Much more Hillaryesque.

As to Trump running, Hillary basically said the same thing that anyone with a brain who has paid even a modicum of attention to Donald Trump over the last 16 months would say.

I think if he can he’s going to run again. Follow the money with Trump — he’s raised about $130 million sitting in his bank account that he used to travel around, to fund organizing against elections… I don’t know who will challenge him in the Republican primary.

To Hillary’s point, when Trump officially announces his candidacy, it will be interesting to see how other potential Republican candidates play — or don’t play — their hands.

Part of me thinks prime contenders like Florida Governor Ron DeSantis, and perhaps Arkansas Senator Tom Cotton, would decide to forego a run if Trump runs, and wait until 2028 — knowing full well that the Trump loyalists would do their ****edest to destroy them.

Now I’m not so sure. Perhaps multiple Republican candidates will jump into the race, regardless of what Trump does. And I do think it’s all but certain that former Trump Secretary of State Mike Pompeo, who has shared his belief that Trump should be primaried in 2024, will enter the race.

Now, let’s get back to Hillary’s “No, out of the question” declaration that she won’t run in 2024.

I don’t believe her for a Chappaqua minute. Think about it. We’re talking about a bloodthirsty woman, who has believed since at least 2008 that the Oval Office desk was her rightful destiny; her all-but-promised gilded throne, as if by birthright. Barack Obama first dashed those dreams when the Democrat state media anointed him in 2008 — not Hillary.

Then 2016 rolled around — and there was Donald Trump; a unique force in politics who, in retrospect, was the only Republican candidate among the original17 who could have — and did — beat Hillary, leaving Her Highness seething. Then the added humiliation of addled Joe Biden, who campaigned from his basement and half the time didn’t know what day it was, swooped away with the nomination and into office in 2020. Imagine being Hillary Rodham Clinton, watching Biden on a daily basis.

Don’t you wonder what Hillary might be thinking? Oh, hell yeah, you do — so do I.

So, here’s the deal, as Biden likes to say. Notice how Hillary carefully couched the first words out of her mouth in response to the 2024 question: “No, not a chance. First of all, I expect Biden to run. He wants to run.” So, what? There are untold millions, no doubt, of terrified Democrats who not only don’t want Biden to run; they really don’t want Kamala Harris anywhere near their 2024 presidential ticket.

So, riddle me this: Let’s pretend Democrat Party elders show up on Hillary’s Chappaqua doorstep and beseech her to run. I know, far-fetched — but stay with me. “For the good of the party,” they tell her. Is there any chance in hell she wouldn’t jump at the chance? Of course, there she would — she’d be all over it.

Whatever happens, one — this one — hopes like hell that the 2024 Republican presidential candidate has the sense to look to the future; not relitigate the past. After all, the silver platter that will be handed to the Republicans by the disastrous Biden presidency will be one for the ages — from which we should feast.

Could Republican voters screw it up? You betcha.

"We are standing on the precipice of losing our democracy, and everything that everybody else cares about then goes out the window".

"I pledge allegiance to the Flag of the United States and to the Republic for which it stands, one nation, indivisible, with liberty and justice for all.

To the REPUBLIC for which it stands. 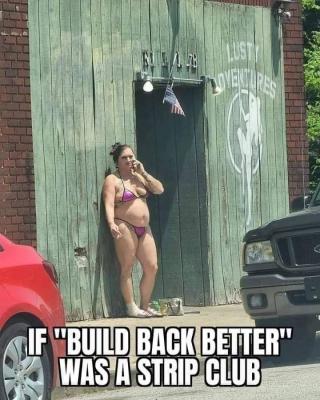