I have a family member, thankfully not close so I don't have to see or talk to her that often, that wants to tell me what the left wants to do for people. She can save it, because we see every day exactly what the left wants to do with people, especially the kids. She will whine about how things are with kids, she hates abortion on demand, and if you listen to her complain about the very things she supports you'd be surprised to learn she is a dyed in the wool liberal, and the things she is whining about is exactly what she and other dems are allowing, encouraging by voting for dems.  One reason she is a dem is because of the hand outs. She will line up for every one she can get, even if she has no need for them. She's a racist that says "I'm going to get in line with the other n****** and get mine. She had zero damage in a hurricane a few years ago but because she owned a trailer in an area in FL that was hit, she claimed she lost rent on it. We know she never rented it a day in her life, she used it for herself and kids and grandkids to vacation, and she even boasted they never checked her story. I don't know a dem that is not sleazy like this, always trying to get over with their hands stuck out even when they don't need it. Now, this is what she would think is just awful but she will still mark that ballot D all the way.

"Pride experience"? What is there to be proud of in this mess? 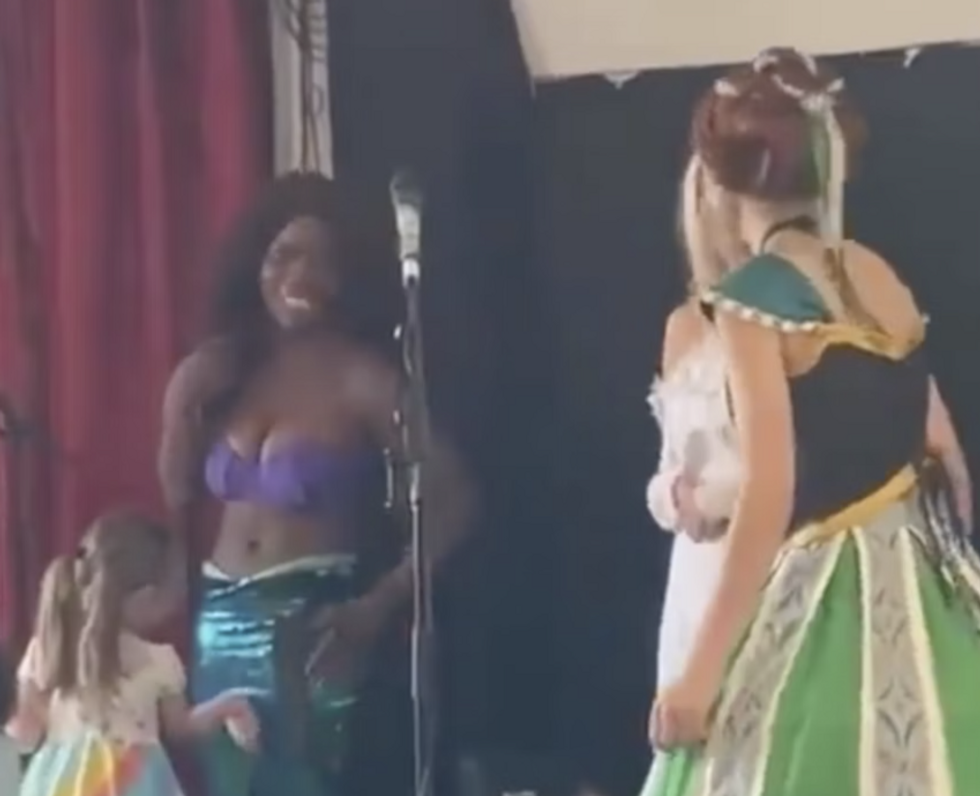 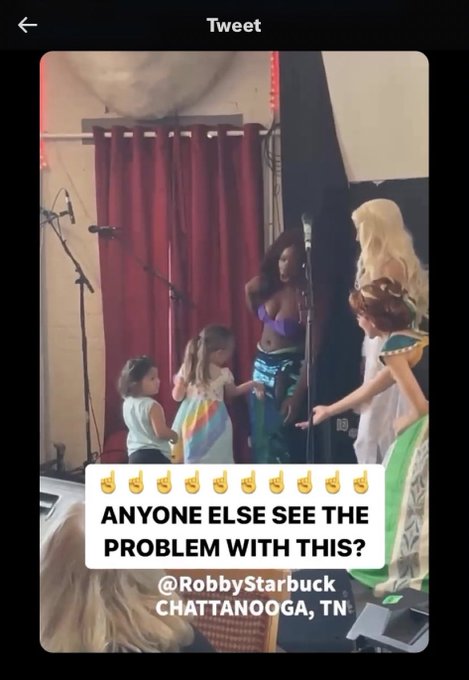 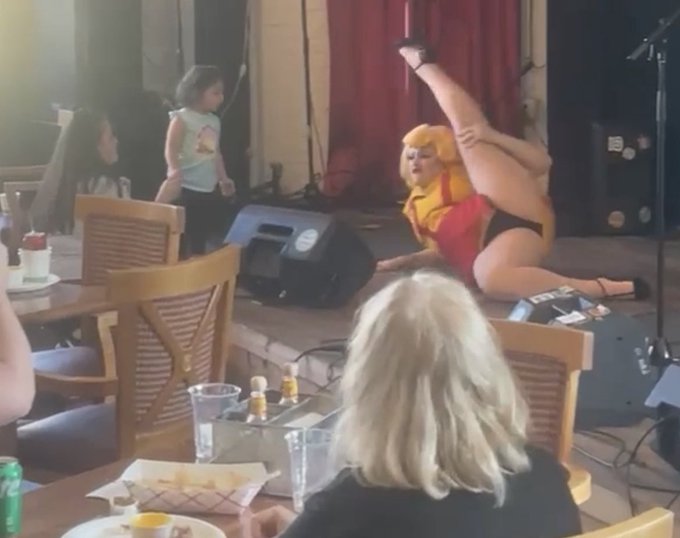 Shocking video shows a risqué “family-friendly” drag show at a brewery in Tennessee. At one disturbing point during the event marketed toward children, a very young girl is patting down the crotch area of an adult dressed as Ariel from Disney’s “The Little Mermaid.”

The event didn’t appear to be promoted on the brewery’s website or social media. The event was promoted by the Chattanooga Pride/Tennessee Valley Pride – an organization “celebrating diversity in Chattanooga, Tennessee and combining our LGBTQ Resources to raise awareness, educate, and improve our community with dignity.”

A Facebook post for the event read, “Happy Chattanooga Pride! As we celebrate leading up to the festival on October 2nd, come hang out with us at Wanderlinger Brewing Company for our annual Pride Youth Day. Featuring speakers/discussions, princess meet & greets, drag queen story time, and a family-friendly drag show.”

Director and producer Robby Starbuck recorded video of the audacious event where drag queens dressed up as Disney princesses and interacted with small children.

Footage shows an adult dressed as Ariel lip-syncing a song from the children’s animated film “The Little Mermaid.” A young girl rubs her hand across the crotch area of the drag queen’s mermaid costume, but the individual does not stop the child.

Another drag queen performer does a dance routine in front of kids – including spreading of the legs that exposed the person’s panties to the young children.

“Today we got footage of Chattanooga Pride Youth Day at Wanderlinger Brewing Co. and this is what kids were subjected to,” Starbuck wrote on Twitter. “It’s NOT hard to not spread your legs to kids. It’s NOT hard to redirect a kid away from that area if they grab near your crotch. We have to stop this madness!”

“The fact they WANT to spread their legs for kids should make very clear to everyone that something is WRONG with this. Where’s law enforcement? We won’t allow this continue,” said the former congressional candidate. “In Tennessee there will be no safe space to be inappropriate like this with kids. We WILL stop this!”

“We will be watching every move the left makes to do this in Tennessee and we will be reporting to the public, to the politicians and to the police until this stops,” Starbuck concluded. “Tennesseans: Send this to your reps and ask them to stop this and to work with us on legislation to protect kids!”

The website for the brewery (which requires people to be 21 or over to access it) previously promoted an “All Ages Pride Event at Wanderlinger.” The Pride Month event that took place in June featured “Drag Queen Story Time with Hormona Lisa” and an “All Ages Drag Show.”

Also in June, A Texas gay bar hosted a “Drag the Kids to Pride” event where drag queen dancers provocatively gyrated in front of children as young as toddlers. The event that was held in Dallas was marketed as the “ultimate family-friendly pride experience.”

Why are there children at a 'brewery' ? 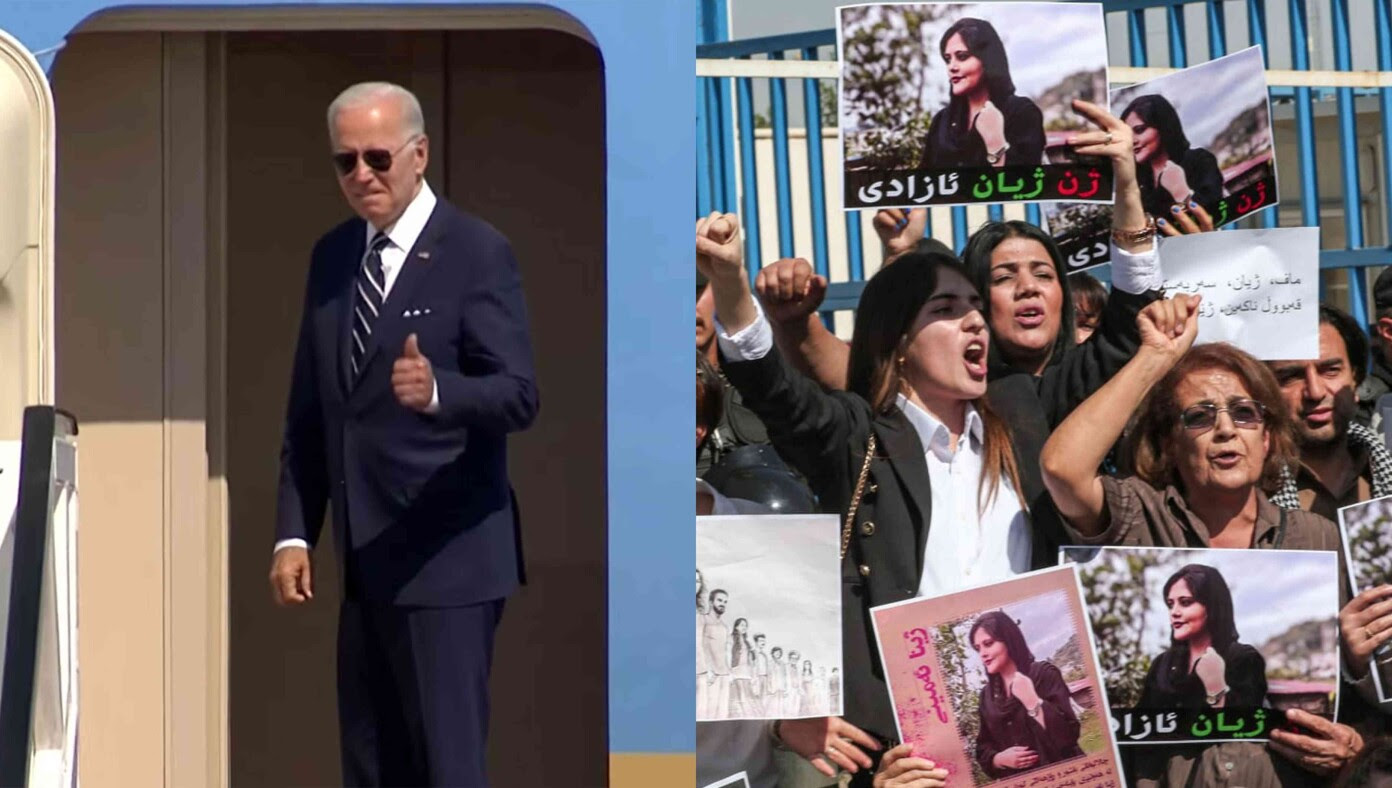 TEHRAN, IRAN — The protests in Iran have been raging for over a week, with more speaking out against Iran's use of "morality police" in enforcing hijab wearing among women. The protests, sparked by the death of a young woman in police custody arrested for hijab noncompliance, have been marked by the defiant acts of hijab-burning and hair-exposing, which prompted Biden to launch an emergency trip to Iran to show his solidarity with the Iranian women's hair.

"The women of Iran need my help – we are helping them throw off their impressive, excuse me, their oppressive rules. Who here is sick of these rules, by show of hair? Pardon, I meant ‘by show of hands'?" President Biden spoke to protesters in Tehran on Monday, reaching out to capture a stray woman in need of hair-sniffing.

In brief remarks read from a teleprompter, Biden noted that the protests mark a watershed moment in Iran's history, as well as an opportunity to throw off the shackles of Sharia law, which has been the law of the land since 1979. "The time for the oppression of women's hair to end is now. It is now! Repeat the line. Pause for applause."

Eyewitnesses say the President's aides frantically waved for him to read only the non-italicized words from the teleprompter and motioned for him to take his seat when he finished his speech and began moseying around the stage, having also lost his "YOU take YOUR seat" prompt card. Sources confirm that the aides lured the President to find his seat by placing a woman with uncovered hair nearby, causing his nostrils to flare and his eyes to become bloodshot as he pursued her for a sniff.

At publishing time, chants of "death to the dictator" and "no more hijabs" continued to be heard, with President Biden sidling closer to the women with uncovered hair as he joined in the chanting, wide-eyed, nostrils dilated and fingers wiggling in anticipation.