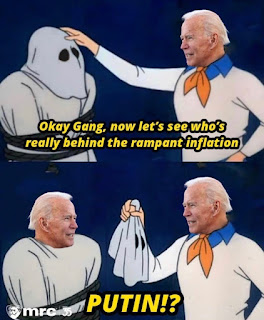 In Joe Biden’s painful and inaccurate speech about inflation on Tuesday, he finally shifted from blaming racism for everything to blaming Covid for everything to now blaming “the supply chain” and “Mr. Putin’s war in Ukraine” (that Biden baited Putin into) for everything.

These “supply chain disruptions,” as everyone is painfully aware, are doing everything from starving babies to shooting up the price of everything, as Wednesday’s 8.3 percent annual inflation number affirmed again. They are also not random, and they’re not a virus’s fault. They’re the direct and foreseeable consequence of ill-advised global lockdowns that nearly all of our nation’s political leaders refused to take into account when they and corporate media colluded to gaslight the world into accepting them.

Our historic “supply chain problems” are not the result of happenstance. They are the result of cowardly, ignorant, and just plain malevolent leadership throughout the entire Covid era.

Lockdowns never needed to happen. Global lockdowns were never before advised or attempted for much worse pandemics, they were based on faulty models, and the Information Age doesn’t change their imprudence. The “supply chain” consequences alone, as well as many of the other horrific medical and social consequences, should be enough evidence for all rational people to conclude that we must never, ever lock down again.

Focused protection of the most vulnerable during the next pandemic? Absolutely. Voluntary prudential health measures that allow societies to keep normal life going? Sure. But never, ever again lockdowns of the kind Americans were forced to endure in Covid-tide, which have resulted in massive, evil social consequences that are only now beginning to be visible.

The supply chains are only the tip of this dark iceberg. As I pointed out this March on the two-year anniversary of the beginning of this human rights catastrophe, there are many consequences, including:

Besides their at best negligible effect at reducing Covid hospitalizations and deaths, lockdowns caused additional and completely unnecessary deaths from delayed or foregone medical care, as well as through starvation due to drastically increased world poverty. According to also-vindicated legitimate experts like Dr. Martin Kulldorff, lockdowns may have also caused additional Covid deaths due to prolonging the outbreak. In short, lockdowns cost lives, while at best saving none.

Various studies estimate lockdowns will have caused millions more malaria and tuberculosis deaths, as well as untold increases in cancer severity and deaths, hundreds of thousands more AIDS deaths, and likely millions more starvation deaths and children living hungry long-term. One study in The Lancet estimated up to 2.3 million additional deaths of children globally per year from lockdowns.

The reality is, it is impossible to just hit “pause” on an economy. An action like this must have millions of unforeseeable effects, and the phrase people are using to summarize some of these butterfly effects now is “supply chain issues.” Justin Hart gives an example of the effects of shutting down the manufacture of just one item — toilet paper.

Now imagine you’re an executive down at the fictitious TP supplier ‘Wipe World.’ The call comes in for the shutdown and you have some serious decisions to make. Production managers at the Big Roll Mill (your supplier for industrial reems of TP) have shut down and will eventually furlough most of the staff. Your shipping contracts will go into default, trucks with slabs of TP rolls tightly wrapped and ready to be dispensed will be called back or even mothballed. The proverbial target of your product is about to hit the fan.

…So a national shutdown leads to a run on toilet paper, caused by a sudden drop in at-work wiping, leading to massive manufacturing rework, supply-chain shifts, and a janitorial staff  forced to walk the halls of vacated buildings like Jack Torrance from The Shining, simulating a proxy population doing their business to keep everything from falling apart.

Anyone who had any familiarity with the insane complexity of making anything or any cooperative activity such as education should have logically deduced that “pausing” an entire society is entirely impossible and idiotic to even suggest. The pause will always have its own effects that make a restart at best really complicated and possibly never able to occur.

That’s already visible in the labor market. We all see the evidence that the shutdowns dampened working-age Americans’ already weak willingness to work. There are “help wanted” signs everywhere and yet another record high number of able-bodied, working-age people refusing to fill positions needed to resolve the problems lockdowns created.

Yes, the “stimulus” hush money played into that — another Covid response failure perpetuated by those in power — but so did the insane panic and the refusal to tell the truth that most working-age people were not at high risk from contracting Covid. So did the lockdowns, which like masks were used not as a health tool but as a manipulation tool, to frighten and control people. That’s also going to have effects that can never be fully undone, including deepening distrust of authorities and public institutions among the minority who were aware of the truth and its mass manipulation in the era of Covid.

This foolish Covid “cure” of lockdowns will end up being much, much worse than the disease. And it never needed to have been foisted on Americans and the entire West in the first place.

All it would have taken was a few more courageous leaders or a less demonic press to protect the American people from responding to a natural disaster with even bigger man-made disasters. But we don’t have either, so Americans punished themselves by suffering 10 times what was in store had we just followed common sense and ridden out the storm with more courage and honesty.

One way would be to stop blaming Covid-19 for our irrational response to it. Instead of saying Covid or “the pandemic” caused the supply chain issues, like Biden does, we can start saying that lockdowns did so. To go a step farther, we can stop calling them “supply chain” issues at all, and call them “lockdown consequences.” That is the truth.

We can all also etch in our memories who exactly was complicit in leading us into panic and devastation, and hold them accountable. That is going to require some electoral changes, starting with the man at the top and going right down through state and federal “health” agencies. No funds for them until they clean house.

It also includes never again believing in any media outlet or writer who proved willing to lie and coerce others with lies. These people have forfeited their moral and professional authority.

Until there is accountability rooted in truth, which starts with telling the truth now and going forward and acting upon it prudently, our society’s vulnerability to mass hysteria will only get worse. That should keep up at night every person who has the power to hold these charlatans accountable and hasn’t yet used that power for its just ends.

I wonder when you think these 'lockdowns' started? Was Biden POTUS then?

I wonder when you think these 'lockdowns' started? Was Biden POTUS then?

Dems shut down the country and the serious lockdowns and threats to people came under Joe Biden and the DNC.

Some of you people need to take a break from conservative media.