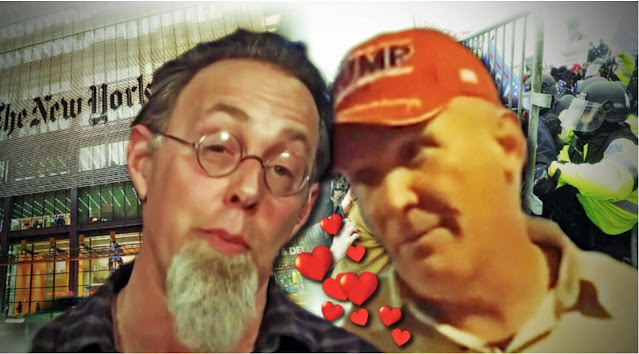 The New York Times just released a puff piece on Ray Epps that is hugely important.

Ray Epps, the only person caught on camera repeatedly directing people into the Capitol, is the only January 6 rioter for whom the New York Times has written a highly sympathetic puff piece: 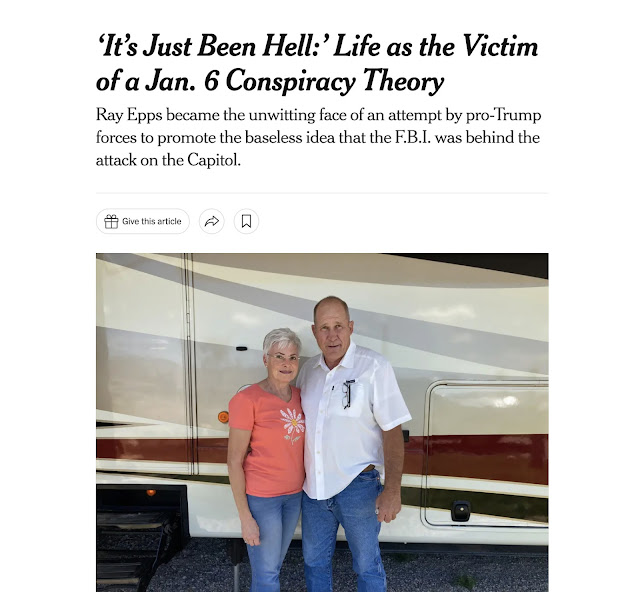 To get acquainted with Epps, watch the following video compilation:

Again, this is the one Jan. 6 rioter the New York Times has managed to write a puff piece for.

IN THE ROCKY MOUNTAINS — Up a winding country road, in a trailer park a half-mile from a cattle ranch, lives a man whose life has been ruined by a Jan. 6 conspiracy theory.

Ray Epps has suffered enormously in the past 10 months as right-wing media figures and Republican politicians have baselessly described him as a covert government agent who helped to instigate the attack on the Capitol last year.

Strangers have assailed him as a coward and a traitor and have menacingly cautioned him to sleep with one eye open. He was forced to sell his business and his home in Arizona. Fearing for his safety and uncertain of his future, he and his wife moved into a mobile home in the foothills of the Rockies, with all of their belongings crammed into shipping containers in a high-desert meadow, a mile or two away.

“And for what — lies?” Mr. Epps asked the other day with a look of pained exhaustion. “All of this, it’s just been hell.”

Here we see a reference to a text message Epps sent to his nephew describing how he “orchestrated movements of people” to the Capitol after Trump’s speech:

Mr. Epps also said he regretted sending a text to his nephew, well after the violence had erupted, in which he discussed how he helped to orchestrate the movements of people who were leaving Mr. Trump’s speech near the White House by pointing them in the direction of the Capitol.

Will this text message soon become a matter of public record? What exactly is Epps’ phrasing? Will other Ray Epps communications soon come out that will further clarify this sudden need for aggressive damage control?

For clarification, this is a video compilation of Epps “orchestrating movements” to the Capitol. We wonder how precisely Epps described his decision to do so.

Getting back to the Times piece, it’s also important to note that the piece contains no explicit denial by Epps of association with military intelligence, DHS, JTTF, or any cutouts or intermediaries. We have references to “lies” and Epps’ wish that “the truth come out,” in addition to denial of association with law enforcement.

I wonder if the author of the New York Times piece, Alan Feuer, could clarify for the record: did he ask Epps if he had any association with any intelligence agencies or cutouts of such agencies? If so, what did he say? If not, why not?

Feuer’s NYT piece describes Epps as a Trump supporter. He says “Trump traveled to Washington to back Mr. Trump”… and that he “took a last-minute trip to Washington for Trump’s speech about election fraud:

Mr. Epps said that he had acted stupidly at times when he and one of his sons took a last-minute trip to Washington for Mr. Trump’s speech about election fraud.

The only problem is that Ray Epps didn’t go to Trump’s speech. That’s right, this alleged Trump supporter travelled all the way from Arizona to DC, and didn’t even attend Trump’s speech. Instead, he spent the evening of January 5th and the morning of the 6th telling people to go into the Capitol.

Did Alan Feuer, the obscure NYT reporter who penned the puff piece, think to ask “Trump supporter” Epps why he travelled all the way to DC and skipped Trump’s speech?

For that matter, did Feuer ask where Epps got the idea to urge people to go into the Capitol in the first place? Did it occur to Epps out of the blue? Did someone else give Epps the idea? If so, who?

The whole purpose of the January 6 Committee is to figure out what caused the events of the 6th. Epps was calling for people to go into the Capitol the evening before. Wouldn’t it be newsworthy to know where Epps got the idea, and why he was so doggedly fixated on that particular mission?

The very fact that these questions weren’t asked indicates that this is one of the sloppiest and most transparent cover-up jobs in New York Times history—a total Feuer job!

The Times piece attempts to wave off Epps’ January 6 participation as negligible—similar to those who committed minor offenses and weren’t charged:

While Mr. Epps was a participant in some of the events that unfolded on Jan. 6, the claim that he inspired the Capitol riot in a “false flag” plot is solely based on the fact that he has never been arrested and therefore must be under the protection of the government.

But scores, if not hundreds, of people who appear to have committed minor crimes that day were investigated by the F.B.I. but have not been charged or taken into custody.

Yet Epps is the key person caught on video with an advance plan to go into the Capitol. He’s there the morning of the 6th directing people to the Capitol, and he’s right up at the barricade during the initial breach, after which he rushes into the restricted zone. Note that many others, including Jeremy Brown, Owen Shroyer, Mark Ibrahim, Couy Griffin, have been hit with trespassing charges for this.

But Epps isn’t open to just a trespassing charge. Not enough has been said about the significance of the following video. Note Epps message “WHEN we go in, leave this here.” Epps says this just minutes before the initial breach of the Capitol grounds:

How is this not a basis for a conspiracy charge?

For some perspective, January 6 defendant George Tanios faces serious conspiracy charges for saying “Hold on, hold on, not yet, not yet… it’s still early” when his alleged co-conspirator asked for bear spray:

Ray Epps’ participation in the Jan 6 riot was sufficiently egregious as to make him one of the early targets of the left-wing online investigative group Sedition Hunters, and earn him a spot as one of the first 20 of FBI’s most wanted for January 6: 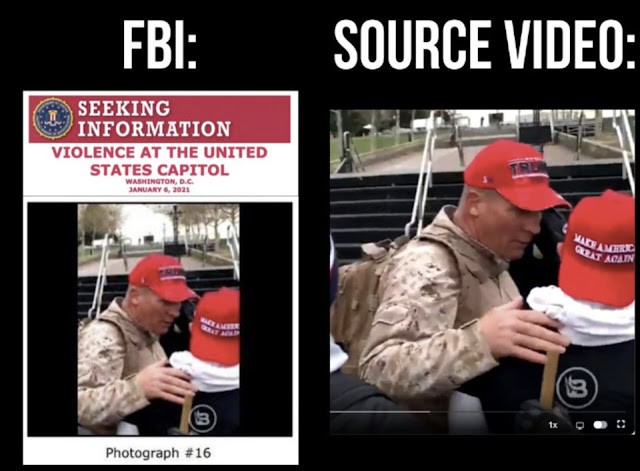 Amazingly, Ray-Epps is referenced as a pre-planner of the Capitol siege in the NYT’s own video documentary on January 6, “Day of Rage: How Trump Supporters Took the US Capitol”:

The very same NYT that now dismisses “conspiracies” about Ray Epps refers to Epps in its own definitive video documentary as a rioters for whom “storming the capitol was part of the plot all along.”

Again the NYT video documentary features Epps as one of the key orchestrators of the Capitol siege:

The Times piece ominously suggests Epps will sue news outlets (possibly Revolver News and/or Tucker Carlson) for defamation… should Epps sue the Times itself then for suggesting that Epps pre-planned the Capitol attack in its own ostensibly definitive video documentary of that “Day of Rage?”

To that end, Mr. Epps and his wife have been searching for a lawyer to help them file a defamation lawsuit against several of the people who have spread the false accounts. Should they end up doing so, they would join a list of other individuals and companies — most notably, the voting machine producer Dominion Voting Systems — in using the courts to push back on the rampant disinformation that emerged again and again during Mr. Trump’s efforts to overturn the election.

The Times piece also specifically blames the “obscure” Revolver News for bringing the bizarre case of Ray Epps to the public’s attention.

The bottom line here is that Ray Epps is the smoking gun of the Fedsurrection narrative, as studiously documented in Revolver News’ now classic two part series on Epps. If it turns out Epps was acting on behalf of some government agency on January 6, the entire official narrative collapses in one fell swoop.

Now, the New York Times is kicking off a massive damage control campaign to make any unsanctioned ideas about Epps too toxic and dangerous to print. Regime janitors like Feuer, who specialize in mopping up Fed dirty work, will go into overdrive as more embarrassing information about Ray Epps and the initial breach comes out.

We’re on to their game — it’s too late. The Times piece reports that Ray Epps just wants the truth to come out. Let it be so, and stay tuned for much more.