Here's what the left values. This man killed thousands of the most vulnerable by putting infected people in with them...and the loony left gives him an Emmy!!! Now this comes out...and watch folks...it will die on the vine!

While it’s only March, Gov. Andrew Cuomo’s really bad year just got a little worse when a third accuser came forward on Monday after two former aides have charged the Democratic governor of sexual harassment.

Making matters worse, Cuomo is even beginning to lose CNN, which all but served as his personal PR machine throughout much of 2020.

Anna Ruch met Gov. Cuomo for the first time at a wedding reception in New York City and his brazen behavior in the crowded room left her “confused and shocked and embarrassed,” The New York Times reported.

The encounter occurred recently, in September 2019, and according to Ruch, a former member of the Obama administration and the 2020 Biden campaign, Cuomo not only put his hands on her, but asked if he could kiss her — loud enough for others to hear.

Remarkably, there is a photograph of the encounter and, to the surprise of many, CNN anchor Jake Tapper shared the image online: 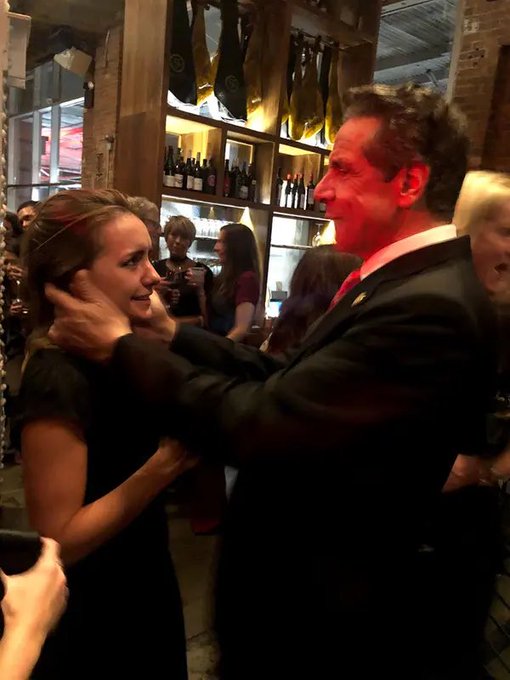 On Sunday, before Ruch came forward, Cuomo released a statement calling for an “outside, independent review” of the allegations leveled against him and apologized for behavior that may have been “misinterpreted,” insisting that he never touched anyone or made a proposition.

“I acknowledge some of the things I have said have been misinterpreted as an unwanted flirtation. To the extent anyone felt that way, I am truly sorry about that,” the governor said in the release.

More from The Times on Ruch’s story:

The governor was working the room after toasting the newlyweds, and when he came upon Ms. Ruch, now 33, she thanked him for his kind words about her friends. But what happened next instantly unsettled her: Mr. Cuomo put his hand on Ms. Ruch’s bare lower back, she said in an interview on Monday.

When she removed his hand with her own, Ms. Ruch recalled, the governor remarked that she seemed “aggressive” and placed his hands on her cheeks. He asked if he could kiss her, loudly enough for a friend standing nearby to hear. Ms. Ruch was bewildered by the entreaty, she said, and pulled away as the governor drew closer.

The embattled Democrat was already facing intense scrutiny over concealing the number of COVID-19 deaths occurring in nursing homes and assisted living facilities, and then Lindsey Boylan, a special adviser under Cuomo, released a detailed essay of her experiences with Cuomo.

Charlotte Bennett, another former aide, then came forward to accuse Cuomo of sexual harassment — she would dismiss his statement issued on Sunday.

“These are not the actions of someone who simply feels misunderstood,” Bennett said, according to The Times. “They are the actions of an individual who wields his power to avoid justice.”

Bennett called on other women to speak up if they’ve been the victim of inappropriate behavior by Cuomo: “If you choose to speak your truth, we will be standing with you. I promise.”

Rep. Kathleen Rice, D-N.Y., a former Nassau County district attorney, took to social media to call on Cuomo to resign — the first Democrat in New York’s congressional delegation to do so.

“The time has come. The Governor must resign,” she tweeted Monday.

Before Ruch’s story was reported, New York City Mayor Bill de Blasio said Monday that Cuomo should step down if the sexual harassment allegations against him by two former aides are corroborated.

“If someone purposely tried to use their power to force a woman to have sex with them, of course that’s someone who should no longer be in public service,” the radical left mayor said at a press briefing.

Ironically, after serving as a one-man cheering squad for his brother in 2020 — over his handling of the pandemic, of all things — CNN anchor Chris Cuomo commented on recent developments Monday, only to say that he “cannot” report on them “because he is my brother.”

Even more ironically, in an interview aired a couple of weeks after Cuomo’s directive that sent coronavirus-positive patients into the state’s nursing homes, his little brother teased him on air, “I’ve seen you referred to a little bit recently as the ‘Love Gov.’ And 20 women say Trump tried to rape them.

And 20 women say Trump tried to rape them.

Any claims against Trump have been recanted or found to be lies too. The women Clinton...Cuomo and the Bidens raped and/or sexually molested however, haven't recanted.

Pig in a blanket.

New York Democratic Sens. Kirsten Gillibrand and Chuck Schumer have joined a long list of lawmakers in calling for their state's governor, Andrew Cuomo, to resign amid mounting allegations of inappropriate conduct.

It's up to 20 women now that swear that trump tried to rape them.

And all the women that accused Trump have recanted...or been proven to be lying and dropped their claims. That has to chap the left's ***!! It sure has torn up old David's!! Not one of the 20 women that said trump tried to rape them dropped their claims.  And he was divorced 3 times and cheated on each wife even the last one that still can't speak english.

Video from the January 5, 2011 ceremonial swearing-in of Sen. Kelly Ayotte (R-NH) shows the then 68-year-old Biden maneuvering to get Ayotte’s six-year-old daughter Kate to stand next to him so he could continuously touch her and repeatedly grind his crotch on her.

Still photo by Getty Images shows Vice President Joe Biden with his left hand wrapped around the throat of 6-year-old Katherine Daley, the daughter of Sen. Kelly Ayotte (R-NH), as he pulls the child toward his crotch, at a ceremonial Senate swearing-in session at the Capitol in Washington, D.C., January 5, 2011. Also in the photo are Ayotte’s husband Joseph Daley and their son Jacob Daley.

Kate is first seen in the video running away from Biden and hiding behind the old Senate podium. Biden calls out to her, “Who is that beautiful child?” Her parents call her out and she is introduced to Biden who asks here, “How old are you, seventeen?” Kate tells Biden she is six.

Biden sets the Ayotte family for the ceremonial swearing in. Kelly on one side, husband in the middle and Biden on the other side with Kate between her father and Biden, as Ayotte’s younger son Jacob stays with his mother. Biden leans in and presses his crotch against the girl as he speaks to her parents before swearing in Ayotte.

The girl gets an uncomfortable look on her face and tries to shift away. Biden moves closer and gives her a hip thrust on her left shoulder. Biden places his right hand on the girl’s head, steadying her as her left shoulder rests in his crotch–even as her father has his left hand on his daughter’s right shoulder and her mother look at Biden to be sworn in.

Biden stroke’s the girl’s hair with his right hand as he reads the oath of office from a card held in his left hand as her left shoulder is nestled in his crotch. Biden seems more intent on touching the girl than administering the oath to her mother. The girl breaks contact by lifting her dress to scratch her leg.

With the oath over, Biden starts stroking the chin of the girl, asking her if she is bored and leans her shoulder back in his crotch.

As it appears the ceremony is over and Ayotte moves to leave Biden strokes the head of the girls, bends over and whispers to her, “See you, beautiful child. Just remember, no dates or boys til you’re thirty years old.” Ayotte laughs and tells Biden, “I like that! That’s exactly right”

Biden then says he has four beautiful granddaughters as he stands behind the girl, stroking her hair with both hands then bends over and kisses her on the top of the head. Biden then makes small talk about granddaughters as his left hand goes around the throat of the girl. The girl moves away and Biden puts his hand on her throat again, pulling her against him as he continues speaking with her parents. Biden then places both hands on her shoulders.

A request is made for more photos.

After Biden and the family pose for a few more photos, Biden strokes the girls hair. Then steps back for a second. The father strokes her hair and then Biden moves back in and pulls the girl toward his crotch with his right hand on her neck pushing her head against him while stroking her hair with his right hand. After a few seconds the girl spins away from Biden and holds on tight to her father. Amazingly, Biden steps up and leans on her from behind for a second and strokes her hair with both hands as she hugs her father. The girl reaches for her father’s right hand, clinging to him as the family finally walks away from Biden.

Biden ignored Ayotte’s son almost throughout the entire ceremony, greeting him at the beginning with a stroke of his head as he was held by Ayotte and asking him old he was (the answer is hard to hear but Jacob would have been two or three at the time.). His last interaction with the boy was when he invited him and his sister to stand next to him. The girl did, but the boy did not. The girl initially pressed close to her father but Biden pressed up against her anyway. Biden completely ignored the boy after that.