NYC schools 'overwhelmed' by influx of migrant students: 'We are not prepared for this'

Some New York City schools are warning officials that their teachers and staff are not prepared to handle an influx of thousands of migrant students.

"Our schools are not prepared," said Egorov. "We don't have bilingual teachers. Children are being asked to translate for our children. Our schools were not prepared to receive this influx of students. And we want to make sure that everybody is being served well."

"Our schools are doing the best that they can. But the problems from the federal government, from city and state, are being dumped in our schools. And it's not our responsibility for us to do immigration policy."

Egorov said there is a concern about learning gaps in the classroom since most of the migrant children do not speak English.

"Our teachers are doing the best they can, but you cannot teach five grade levels in one class." "We definitely need a lot, much higher level support to really make sure that it doesn't impact our schools," said Egorov.

According to the New York Post, a Manhattan public school with just one certified bilingual teacher is reeling under the weight of a sudden influx of migrant students who don’t speak any English. 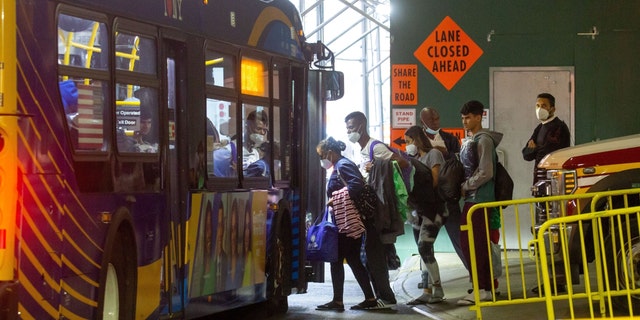 Migrants leave for a shelter from the Port Authority bus terminal in New York, the United States, on Sept. 27, 2022. New York City will set up and open transitory humanitarian emergency response and relief centers in the coming weeks to handle the influx of migrants transported from Texas and other border states, announced New York City Mayor Eric Adams recently.  ((Photo by Michael Nagle/Xinhua via Getty Images))

Officials in Staten Island said this week they're concerned about local schools seeing an "unsustainable" influx of migrant children in the coming weeks.

Travis Civic Association President Gene Guerra said the school in his neighborhood is already "overflowing" and he's unsure if the principal would be able to accept more students.

"There's really no place to put these children," said Guerra, telling host Carley Shimkus one school is already using a cafeteria as a classroom.

Poor things, how are they supposed to cope? They can only groom and indoctrinate so many at once. Are there enough drag queens to go around?