We’ve been beating up Joe Biden a lot over the failures in Afghanistan. But there’s a lot of failure to go around — including the leadership in the military not standing up to Biden and telling him that his moves were placing the mission and Americans at greater risk.

It’s something that one would think wouldn’t take a rocket scientist in terms of military strategy to figure out — you don’t close your fortified air base and pull out your troops before you extract Americans and the Afghan allies who you need to get out.

But maybe the thoroughly modern Gen. Milley was too busy trying to understand “white rage” and not spending enough time implementing basic tactics 101. They had months to figure this out. The guys on the ground performed heroically, the leaders less so.

But there was one example of the leaders not getting things that had a lot of people talking over the weekend — a tweet from Lt. General Maria Gervais. Gervais was just promoted in June and named to the U.S Army Training and Doctrine Command as the first woman to lead as the deputy commanding general and chief of staff. So one might think that she should know something about the military, especially with that particular job. Except she revealed not so much in this tweet that she later deleted. 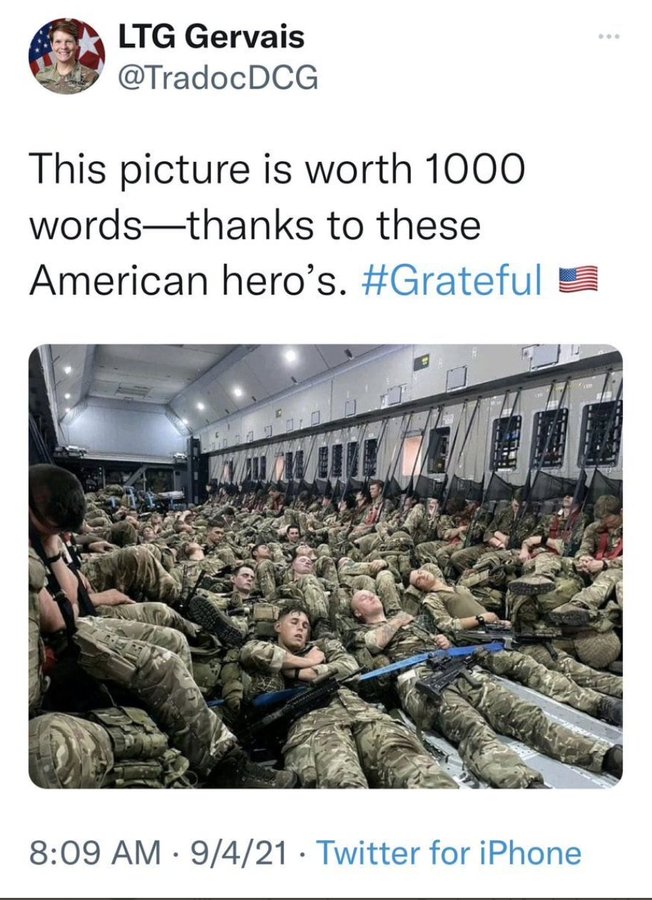 Now, it was nice that she wanted to recognize the troops — that’s a good thing. Except she should know if they’re our troops. Indeed, they weren’t. These were British troops. The British, embarrassingly, had to tweet that at her and explain. Sort of important that someone in her position can’t recognize if troops are ours, that she couldn’t ID the camo or the weapons, which would have given her clues. Moreover, if you’re in that position, know how to spell “heroes”