I remember the first time I watched “Anchorman,” the 2004 hit comedy starring Will Ferrell. It was an instant classic, and one of the most quotable movies of all time. Countless memes were birthed from his hilarious scenes, including the idea of someone being so vapid and disconnected that they’ll read anything their teleprompter says.

Little did anyone know that we’d end up with a real-life Ron Burgundy in the White House nearly two decades later. Joe Biden has had numerous fights with his comically oversized teleprompter (see here, here, and here), and on Friday, he channeled Burgundy by repeating the instructions “end of quote” and “repeat the line” while squinting to see the oversized font in front of him (Biden can’t use a regular teleprompter, so he uses an enormous television instead).

Once the clip started to go viral, Biden’s assistant press secretary jumped in to claim that he actually said “let me repeat that line.” As you can see from the video, that’s just an outright lie, and it led to a legendary ratio. There’s just no question that Biden read instructions off his teleprompter that he wasn’t supposed to read, something you’d expect of a geriatric, senile old man, which the president clearly is. Yet, incredibly, the White House decided to falsify the transcript, asserting that he said “let me repeat the line,” which was the original lie told by the assistant press secretary, and a claim that was easily debunked by simply…watching the video.

Now, maybe I’m just old-fashioned, but I’d think it’s well out of bounds for an administration to falsify an official government document in order to protect the president from legitimate questions about his mental health. In fact, I seem to remember lots of freaking out when Trump was accused of such (he didn’t). In this case, you have a current president who is so senile and incapable that he can’t read a speech off a teleprompter the size of a movie screen, and his staffers are telling you not to believe your lying ears.

It’s insane, and it’s more evidence that this guy is not up for the job. If Biden wasn’t a Democrat this would be a scandal. Heck, I’m old enough to remember when Trump walking down a ramp slowly drew calls for the 25th amendment. As it stands, this just goes on the list. Or maybe I’m just crazy for thinking these kinds of lies are actually a big deal? I don’t think I’m crazy, though.

If the joe biden of 30 years ago could see what today's joe biden has become, he would be mortified.  I can't stand the man in either era, but I can't help but feel like he is being taken advantage of by his family and political circle. 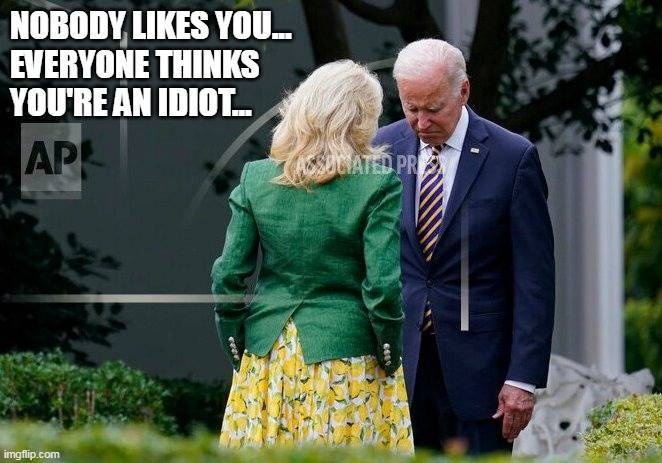 Joe shows off his trick mouth that enables him to speak out of both sides of it at once.