More of the dishes it out but can't take it. Acosta you stinking crybaby. Jerk his press credentials.

Press Secretary Sarah Sanders took her long-running feud with CNN’s Jim Acosta to a new level during Thursday’s White House briefing, blasting the media for personal attacks against her and accusing the press of debasing the discourse in America.

The press secretary was responding to similar allegations leveled against President Trump. Specifically, Acosta asked Sanders to say whether the press is indeed the “enemy of the people,” as her boss has controversially claimed, after Ivanka Trump broke with her father on the statement at an Axios event earlier Thursday.

“I think it would be a good thing if you were to say right here, at this briefing, that the press … are not the enemy of the people. I think we deserve that,” Acosta told Sanders.

Sanders pointed out that President Trump has “made his position known,” before the CNN senior White House correspondent interrupted – resulting in Sanders and Acosta talking over each other. From there, Sanders launched into a point-by-point rebuttal.

“It’s ironic, Jim, that not only you and the media attack the president for his rhetoric when they frequently lower the level of conversation in this country. Repeatedly, repeatedly the media resorts to personal attacks without any content other than to incite anger,” Sanders fired back.

She went on to say the media have attacked her personally “on a number of occasions” before specifically calling out rhetoric she said aired on CNN.

“Including your own network said I should be harassed as a life sentence. That I should be choked. ICE officials are not welcomed in their place of worship,” Sanders said.

“When I was hosted by the Correspondents’ Association, which almost all of you are members of, you brought a comedian up to attack my appearance and call me a traitor to my own gender."

“When I was hosted by the Correspondents’ Association, which almost all of you are members of, you brought a comedian up to attack my appearance and call me a traitor to my own gender,” Sanders said. “As far as I know, I’m the first press secretary in the history of the United States that’s required Secret Service protection.”

Sanders said the media “continues to ratchet up the verbal assault against the president,” noting that the administration has a “role to play” but the media are also responsible for the discourse in America.

Acosta then reminded Sanders that she did not say whether or not she considers the media the “enemy of the people.”

“Are we to take it, from what you just said, we all get put through the ringer. We all get put in the meat grinder in this town and you’re no exception,” Acosta said. “I’m sorry that that happened to you. I wish that had not happened. But, for the sake of this room. The people that are in this room, this democracy, this country … the president of the United States should not refer to us as the enemy of the people … all I’m asking you to do, Sarah, is to acknowledge that.”

Sanders did not directly respond to Acosta’s question, but complimented his hunger for a response.

“I appreciate your passion. I share it. I’ve addressed this question. I’ve addressed my personal feelings, I’m here to speak on behalf of the president. He’s made his comments clear,” Sanders said.

Acosta didn’t approve of Sanders’ response and took to Twitter to express his feelings.

“I walked out of the end of that briefing because I am totally saddened by what just happened. Sarah Sanders was repeatedly given a chance to say the press is not the enemy and she wouldn't do it. Shameful,” he wrote.

Its too bad for Jim Acosta that the old soap operas are going away.  Little Jimmy would have been much happier as a drama queen in the old soaps, where over acting was the norm.

Sarah did great, sadly the democrat media will just ignore it 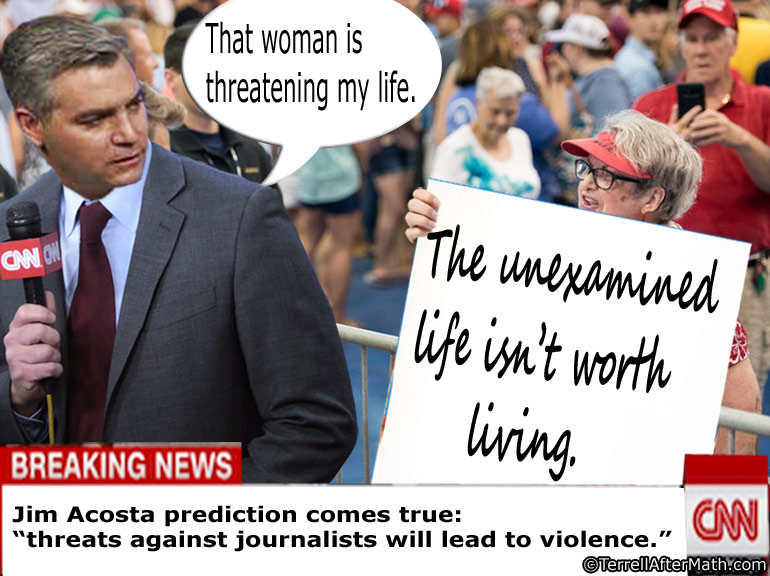 I haven't see Acosta this upset since Sarah Sanders was denied service at the Red Hen. Oh, wait. Well maybe when Roberts called our first lady a "ho".  No, not then either? Well, how about when the Fox reporter was surrounded and basically run off  when she was trying to give her report? No? When kids were attacked for wearing MAGA hats? No? Gee Jim, looks like you got a small bit of what you and the rest of your snake pit "journalists" have coming.

Trump supporters are being accosted, beat up, and cursed, all is ok in the world.  Someone yells "CNN Sucks" and liberal journalists fear for their lives.  The hypocrisy of it all just amazes me.  I hope they keep it up though, will work to Trump's advantage come 2020.

Sign In To Reply
Post
Since our forum Republicans love cartoons so much....
12 hours ago
Adulting...
14 hours ago

More dem clean up.
14 hours ago