Democratic Minnesota Rep. Ilhan Omar’s 2020 campaign contributed to nearly 80% of the total political payments her husband's consulting firm received ahead of the November election, according to federal filings.

E Street Group, owned by Omar's husband Tim Mynett and entrepreneur Will Hailer, received more than $3.7 million in campaign spending over the course of the 2020 election cycle, filings show.

Omar's campaign contributed more than $2.9 million to that total, The Washington Free Beacon first reported, citing Federal Election Commission filings. The congresswoman's contributions to her husband's firm made up just over 78% of E Street Group's total payments between January 2019 and November 2020.

Omar pledged to sever ties with the firm following her reelection, but before doing so, her campaign paid E Street Group $138,000, filings show. The firm has also received nearly $200,000 from Rep. Pramila Jayapal, D-Wash.

"You don’t stop using the service of people who are doing good work because somebody thinks it means something else," she said. "Why would I not work with people who understand my district, who have been working there for 10 years, who understand what it means to raise resources for a candidate like myself and manage and target our communications to our district to battle the misinformation and narratives that the media and our adversaries continue to put out?" 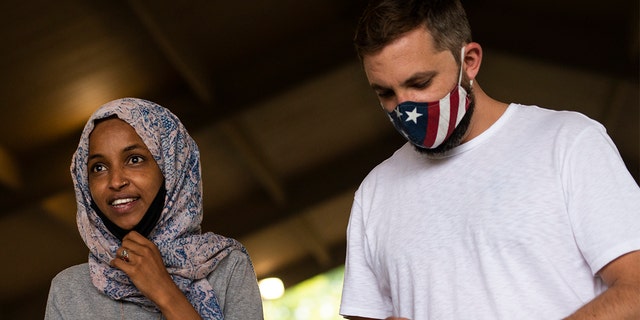 Before their marriage in March, Mynett’s firm already was doing work for Omar’s campaign and had been paid more than a half-million dollars.

She said in a campaign email on Nov. 15 that she was cutting ties with the firm to put an end to questions about the connection between her campaign and her husband's business. She has denied any wrongdoing.

"Every dollar that was spent went to a team of more than 20 that were helping us fight back against attacks and organize on the ground and online in a COVID-19 world," Omar wrote in the email. "And Tim -- beyond his salary at the firm -- received no profit whatsoever from the consulting relationship the firm provided."

FEC rules state that "campaign funds may be used to make salary payments to members of the candidate’s family" if "the family member is providing a bona fide service to the campaign" and "the payments reflect the fair market value of those services."

Third husband after first and then brother.

WHICH 'husband'? Her real one, or her brother? What's the Shariah punishment for incest?

WHICH 'husband'? Her real one, or her brother? What's the Shariah punishment for incest?

The brother ended up going back to England. She must have cheated with her father and teed him off.